What we'll be drinking

I just got back from Arbor Farms where I was picking up the last of the ingredients for our Thanksgiving menu and, most fun of all, picking out what we'll drink: 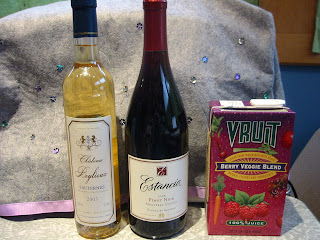 From right to left--Vruit, for the small people, Estancia 2006 Pinot Noir with dinner, and for the cheese course, a half-bottle of Chateau Beylieux 2003 Sauternes.

Arbor Farms has good deals on wine. Their selection isn't the biggest in town, but the store manager loves to talk about wine (he pointed me to the Estancia and said it was a great deal and better than some of the higher priced Pinots he carries) and they give you a 10% discount when you buy any 6 bottles.

I was going to get some tawny port for the cheese course, but then I spied the Sauternes and went for that. The first time I tasted Sauternes was when I lived in Bordeaux and was invited to dinner at one of the profs houses. A fellow lecteur, who was a non-drinker, brought along a bottle of Sauternes that someone had given him; the prof said that it was a really good Sauternes, way out of a lecteur's price range, and when it rolled across my tongue it made me think of liquid gold. Since it is cold and damp and rainy today, I was inspired to bring that bit of sunshine to our meal tomorrow. It probably won't be as glorious as that first sip years ago (especially since this is a relatively affordable bottle), but I'll embellish it with my memories.
Posted by Kate at 9:50 AM

Wanna do a cookie swap with local AA food bloggers? I couldn't find your email address on this site, so send me your email kitchenchick@gmail.com.