It's amazing what the right format can do for my writing.

I've been plugging away at my children's novel but as the document got longer, I've been having trouble with the organizing part. I felt like I was spending way too much time scrolling up and down in the document trying to find where the part I wanted to write fit in the work as a whole. I tried listing scenes in a separate Word document, but again, that left me scrolling up and down until I was getting dizzy. I tried using an Excel spreadsheet to map the scenes and the action, but it didn't work for me. Maybe I have too many mathematical associations with Excel (that's what I use for our budget tracking) for it to feel like something I could use to organize a creative project.

So yesterday, once I got the little people off to their various schools, I decided to hell with technology! I cleared off the dining room table, unrolled the huge roll of paper that I bought a while back at the Scrapbox for kid art projects, and got out some multi-colored post-it notes. I assigned colors to major characters and locations (I'm working on a parallel universe scenario so being able to see where they are is important) and drew some long, horizontal columns on the paper (yup, basic linear organization where the upper left is the beginning of the novel and the bottom right is the end). Then I printed out my document and got to work transferring what I have already written scene-wise to the sticky notes and where it will fit in the narrative as a whole. 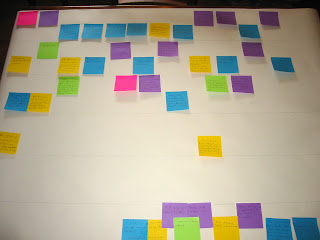 And the great thing was once I filled in the spots I had written, I could see where I needed new scenes and additional material, where previously existing scenes should be moved, and what part of the book I really haven't approached yet (see that big swath of white...?) I was on a great roll, jotting down ideas for plot developments and scenes when the alarm went off to remind me to pick my son up from his school (yea, I've tried remembering to get him without an alarm and that didn't go so well...). So I rolled up the paper and stuck it in a corner of my office where (hopefully) the little people won't find it and start re-organizing the stickies.

So, here's my question. What organization method do other the writers out there use to visualize their work as a whole?
Posted by Kate at 2:50 PM

During the pre-writing phase of my novel. I started doing a basic outline for each scene- who, what, where, why and when. I made a point of accounting for where the main characters were even when they were off-stage. This is especially helpful in a mystery. I also keep a list of the scenes as I'm going along.

Right now I'm in the first draft stage and I'm not thinking about structure too much. I'm saving that for the revision process. When I get to that stage, I'll probably do something similar to your method. I'm envisioning making a huge chalkboard on the wall in my office to make certain the scenes fit together.