Well, the food and company were good...

I haven't finished the last two books that my book group selected. Naughty naughty Kate. But seriously the last two books have bored me to tears. The first no-finish was Kiran Desai's novel, The Inheritance of Loss, which has very pretty writing but nothing happens and the latest was William Poy Lee's memoir, The Eighth Promise, which is so unfocused that I'm still not sure whose memoir it was supposed to be (Lee's? His Mother's? His younger brother Richard's? Unfortunately, I think it was supposed to be his and his was the least interesting of the three possible stories). 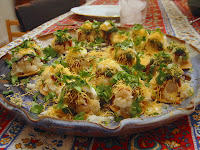 But hey, the food and company were good! For the Desai book we gathered at Meg's and ate some lovely Indian food. To start were some addictive Sev Puri that Ami brought. Ami's co-worker, Sangeeta, coached her in the assemblage of these flavorful mounds of potato, chili's, onion and various chutneys (assembly instructions/recipe below). 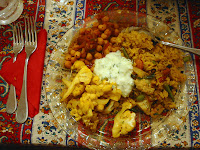 Then we moved on to plates loaded with stewed chickpeas, turmeric spiked cauliflower, raita and biryani rice. 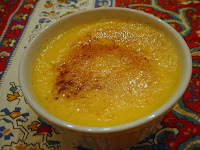 And we finished our meal with cardamom creme brulee. I'm pretty happy whenever I get creme brulee, but the cardamom imparted an even lovelier finish to the richness. 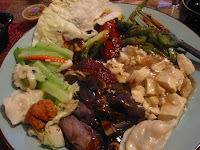 For The Eighth Promise we indulged in a massive quantity of Chinese takeout from Tk Wu, because none of us has a big enough wok supply or stove space to do the cuisine justice (ok, it was also March and we were sick of Winter and just needed a damn break.) I know, the picture to the right looks like a mess, but it was a tasty mess, particularly the tofu with black mushrooms. I also love their dumplings which are served with a vinegary, non-soy based dipping sauce. 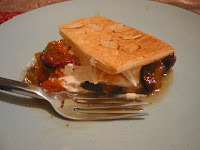 And then for dessert, I made something that had nothing at all to do with the book: puff pastry with almond cream and winter fruit compote. The picture in the NY Times magazine was so appealing that I was willing to simmer, steep, whip and bake up the various components. The most limiting factor for most people to make this recipe is the requirement that the winter fruits (kumquats, dried figs and dried apricots) be simmered in verjus, which is sour juice from unripe wine grapes, which retails for about $18 for 25 oz. Tightwad that I am, I don't often spend that much on a bottle of wine, much less on the juice from un-ripe, un-fermented grapes. But then I hit Wikipedia and found out that verjus is also called husroum in Arabic and is used in place of vinegar or lemon juice in Middle Eastern cuisine. 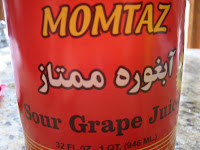 So I trotted off to one of the many Middle Eastern grocery stores in our area and poked around until I found, for $4 for 32 oz, Momtaz Sour Grape Juice!

It did impart a nice level of acidity to the compote, though I still don't think I'd spring for $18 bottle. I'd probably eliminate the sugar in the recipe and substitute white grape juice and a good squeeze of lemon juice. I still have a significant amount of verjus left in the bottle so I think I'll freeze it and when summer comes around, I may use it in this recipe for verjus mint sorbet.

The next book we will gather around is one I've already read and which I know is good, Peter Ho Davies' The Welsh Girl (my review from last year here). I'm hosting the meeting so I need to try and figure out what to cook for the main course. Welsh cuisine? Is there such a thing? Suggestions welcome!

So happy to hear you gave up on the Desai novel. I wanted to like it. I liked the language. But oh my god, it was boring. I've been feeling guilty for months for bailing on it, so your words were a comfort.

Wales is famous for its lamb, which might make things difficult for non-meat eaters. Also leeks are something of a national vegetable...

I have never managed to get past the back cover of the Desai so you've done better than me...