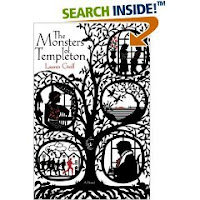 I just finished a book that I have no memory of requesting at the library but that I feel incredibly lucky for having read.

Often, after perusing some of the various book reviews I try to lay my hands on regularly, I put in requests at the library. And sometimes when the book shows up on the shelf with my name sticker on it, I have a little moment of surprise having forgotten the title in the months since the request was originally placed. But usually once I crack the cover, I remember a fragment of the review or at least the source of the recommendation, whether it was paper, blog or human.

But I have no idea who recommended The Monsters of Templeton by Lauren Groff. Whoever it was: Thank you. When I think that I could very easily have missed this book, I feel a little panicky.

This novel has so many facets that it is hard to summarize--the writing varies from the poetic musings of a 200 year-old lake monster, to an epistolary exchange between two peculiar 19th C women, to a straight forward tale of a contemporary girl looking for her roots. I suppose the thing that stands out the most for me is that the main character is a place rather than a person. The town of Templeton is revealed through all the different voices in the book, though clearly the drive for information lies in Willie Upton's research into her ancestors and thus the town's past.

I think it could have been very easy for the book to turn into an assembly of voices, sort of like Under Milkwood (and that probably would have been interesting too and Dylan Thomas isn't one to sniff at when you are comparing a writer's first book). But I'm glad that instead it decided to draw the portrait of the town through the genealogy of the people. I would bet that the author had to edit out some interesting sections and characters to focus on Maramaduke Temple's heirs but I'm also grateful that there was a traditional plot of discovery to follow along with the slow reveal of the town, present and past.

The book isn't flawless--there were a few little things I'd tweak in characterizations and plot details--but so what if it wasn't perfect. Reading this book made me very happy. And that is high praise indeed.
Posted by Kate at 9:47 AM