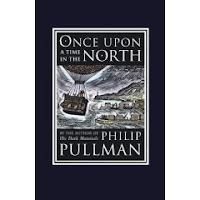 I just finished Philip Pullman's Once Upon a Time in the North which is sort of a prequel, sort of sequel, to the His Dark Materials trilogy. Like his other book, Lyra's Oxford, which came out about 5 years ago, this book is clearly intended as a companion to the trilogy, not as a stand alone work. This one involves the first meeting of Lee Scoresby and Iorek Byrnison and, while the story is nice enough and there are a few new characters who seem to hold promise as far as appearance in future stories, what is really tantalizing are the small pieces of "evidence" that are scattered through the book--little newspaper clippings, a few torn pages from a book on aerial navigation, etc. In fact the biggest "tease" of the book is the inclusion at the very end of the book of two letters from a much older Lyra who is finishing up her Master's thesis in Economic History on "Development in patterns of trade in the European Arctic region with particular reference to independent cargo balloon carriage (1950-1970)". This references a future for the Lyra we left at the end of The Amber Spyglass who was just on the cusp of puberty.

Clearly these characters live on in Pullman's imagination and it leaves me wondering whether we'll get more of these little fragments about Lyra (maybe about Will too?) embedded in other stories (I'd love to have one of these small books be about the Gyptians!) or whether Pullman plans a true sequel to the trilogy.
Posted by Kate at 8:07 AM