Torn between yelling and praise...

I'm having a parenting moment in which I am terribly torn between yelling at my kid and praising her.

I went into her room this morning and found this: 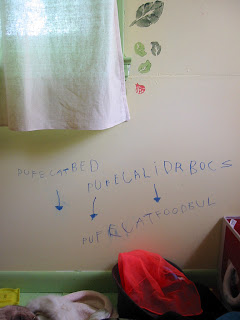 [translation of the writing in the photo from Left to Right: PUFECATBED=Puffy Cat's Bed, PUFECALIDERBOCS=Puffy Cat's Litter Box and PUFECATFOODBUL=Puffy Cat's Food Bowl]

Wow! What great writing for a 5 year old! Damn! That writing will never come off! Sigh. 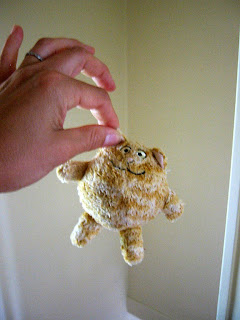 The offending toy (Puffy Cat) being put in "toy time out" (i.e. the top shelf of my closet)
Despite the fact that she used "washable" markers it won't come off. With a Mr. Clean Magic Eraser I can get it to fade a little, but it also takes the latex paint off the wall.

I had a similarly conflicted moment a few weeks ago when Brian was out of town and I was trying to get the kids in bed. Fiona had a spectacular meltdown--normally I'd say she's the easier of my two kids, but when she loses it, she really loses it. After an incredible display of lung power, I finally got her to go in her room to calm down, but while I was trying to get Ian settled, she went down stairs, got a piece of paper and wrote:
"I HAT MOMY"
and drew a picture of a heart with a red line through it. Then she marched back upstairs and taped it to the wall of Ian's bedroom (where I was) which triggered his protective urge and then he was yelling at her for being unkind and she was screaming again at both of us. I didn't know how to react since I was conflicted between praising the good writing and being completely sick of dealing with the tantrum which, far from being over, had now escalated to include her brother.
Posted by Kate at 8:24 AM

I know it's not my wall, but that's pretty damn hilarious.

So kate, if you were going to paint over it, would it make you happy or sad to do that?

(but don't encourage my kids to do this pls!)

As a 1st grade teacher, I showed them their errors and had them correct them!