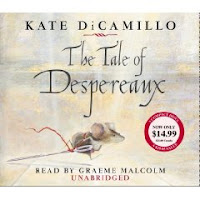 One of the key items that kept us sane while driving from Colorado back to Ann Arbor was a book on CD that I checked out of the library. I had read Kate Dicamillo's The Tale of Desperaux a few years ago and thought it was a lovely book; when I saw the audio version, I thought the kids would like it and it was a book that I wouldn't mind revisiting.

Now I'm raving about this book on CD to everyone I know, even those folks who don't have kids. It really was one of the best readings I have experienced. Graeme Malcom captured every nuance of the prose and each character's voice was incredibly distinct. Sometimes I feel like an audio book is a nice supplement to reading the book, but doesn't necessarily capture everything the printed book has to offer; maybe it is the pacing or maybe it just doesn't match up with the voices I hear in my head. But this book on CD stands alone just fine and does an even better job with the various accents than I could in my imagination. The kids loved it and so did Brian to the point that we didn't want to stop the car because then we'd have to stop the story. We've taken to quoting memorable lines to each other: Miggery Sow's "Gaw!", Antoinette's "Eeet eeez such a disappointment" and Desperaux's brother's regular exclamation "Cripes!"

I also brought along an audio copy of some Junie B. Jones books (which we've never read but a mom I know told me that her kids laughed at the audio version) and found the narrator's voice so excruciatingly shrill that it was only on for about 5 minutes before I hit the eject button. Believe me, we didn't need to import any more examples of shrillness into that car; my kids were doing a fine job on their own! 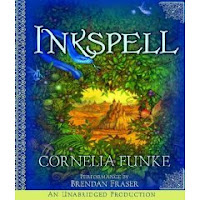 I selfishly brought with me the second half of Inkspell on CD (at 15 CDs it takes a while to get through) which I listened to on my mp3 player. I'm sure Brian would have enjoyed this book, but I thought it was too scary for the kids. The first book, Inkheart, was read by Lynn Redgrave, who I thought did a pretty good job with the reading--her voice is deep enough that she can capture the male characters well. But Inkspell was better, both in the plot and in the reading. It was read by Brendan Frasier, who apparently has become good buddies with Cornelia Funke and appears as Mo in the forthcoming movie of Inkheart. The plot of the novel is perfect for a book-dweeb like me in which the people in the book find they can "read" themselves into the plot of their favorite novel. The rampant book-love that runs throughout the series is very gratifying (one of the characters refers to her books as "her children") and Inkspell also played with all kinds of perplexing literary questions about narrative, agency and rewriting of plots. I can imagine some happy grad student writing a paper about the meta-narratives in the book and how the author handles all of them (if only they let grad students read something as fun as this book). Though I think this is a well-read book on CD, I did need to go back and read the book in the hardcover version when we got back. One thing I discovered was that Funke starts each chapter with a quotation and these quotations are not in the audio version. Many of them are really lovely and varied so I was happy to get these little gems of authorial emphasis in addition to the chance to read at my own pace and wallow in the plot for as long as I liked.

And to close with a bit of good news, the third book in the trilogy, Inkdeath, comes out in October!
Posted by Kate at 12:00 PM

Graeme Malcolm is flat-out extraordinary. He reads the audiobook of A Single Shard, too. You could hardly imagine that his English accent suits a story about ancient Korea, but it's almost as breath-taking a performance as Despereaux.

Thank you for the reference! I just checked and the library has "A Single Shard" on CD! I'll put in my request for it right away.