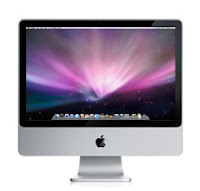 Remember that cute iMac I bought as an antidote to my computer problems?

One month later, I am worse off that I was before. Now I have NO computer, having over optimistically bequeathed my former PC to my kid to make room on my desk for the shiny new Mac.

What happened to the Mac? I got a lemon. It crashed 10 times in a row after I set it up. I finally figured out how to get it to give me an error code, called it in and was told to take it to the Apple store for repair. When I got there they informed me that while they could replace the hard drive right away, they didn't have the other part that was failing, a little heat sensor and it would take a week to get it in (a week? WTF?). I sighed and left my computer at the store.

A week later I got a call saying that they had replaced both items and the computer was still crashing and spitting out error codes. The guy on the phone recommended giving up on this computer and getting a replacement. The only hitch? It'll take another 2 weeks to get the replacement (2 weeks? WTFlyingF?).

I thought about lugging the bequeathed PC back down stairs (it doesn't have a wireless card yet so I can't use it for internet access), reattaching the snarl of wires and just going back to the way things were. But I've decided instead to try this weird thing called "Patience." I know, it's a strange concept waiting for stuff, particularly in this age of instant gratification. I'm trying to make it a little life-lesson. But it doesn't really go well with blogging. I have nowhere to upload my photos and there are a few posts, particularly one of the Lady Food Blogger's Party hosted by the amazing Patti AKA Teacher in the Hood which I attended recently and the meeting of my book/eating group that is happening tonight, that really deserve to have their photographic glory displayed.

How am I posting this whine, you ask? The answer is, not easily. The technological cloud that hovers over our house affected not only the iMac lemon, but my husband's PC which got infected with a load and a half of spyware and viruses at just about the same moment that I was plugging in the iMac for the first time. (Yes, he is an engineer and should have known better than to let his anti-virus subscription expire in 2005, but as I've said before, he is the optimist of the family, though perhaps a little less optimistic since his poor computer was messed with.) After much tinkering, his computer is still not back to normal, but it will now let us connect to the web again. There is a lot of stuff it won't do and poor Brian is going through some Medal of Honor Pacific Assault and Need for Speed 3 withdrawal, but I'm enjoying his company in the long summer evenings more. (See? That's me looking at the bright side, something I don't normally do!). My productivity has been affected by our technological challenges, but while the kids are at morning camp this week, I've been spent time in my son's room at his small desk with the functional but not-connected-to-the-internet PC and cranked out another 2000+ words on my neglected novel. I like to think that writing while immersed in a kid-atmosphere (and picking the bits of K'nex from between my toes) is helping the atmosphere of my fiction, but truth be told, I'll be happy to return to my grown up office as soon as a functional computer arrives. Cross your fingers for me; this household needs all the good technology karma it can get.
Posted by Kate at 1:34 PM

Thanks Kate! You are pretty amazing yourself :)

I haven't posted my pics yet either...so I hear ya!

I hope things get straightened out soon!

I have always used Macs and always will. However, over the batches over the last couple of years, both desktop and laptop models have had problems with fans, overheating, and heating sensors. Sounds like the Apple folks tried to fix the most common stuff, but your machine was dead out of the box.

The new machine should be much better. Just make sure you get applecare with it. Good luck.

Oh, dear, it must have been Lou who infected you. He's had the worst luck w/Macs I've ever seen. May all be restored to good working order soon.

Did you see this essay on YA books in the Times book review?