We are lucky to be friends with someone who is intent on reproducing Southern barbecue up here in the northern climes. Thanks to his Southern wife, our friend Brian (yep, my husband Brian's best friend which makes life a wee bit confusing when we get the families together. Luckily my Brian is happy to be called "Crazy Brian" so we can be a little clearer in our conversations) has had ample oportunity to sample the real deal and it is our good fortune that he recently invested in this beauty: 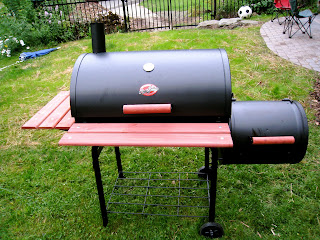 The first meat-fest we were invited to was to try out his smoked pulled pork: 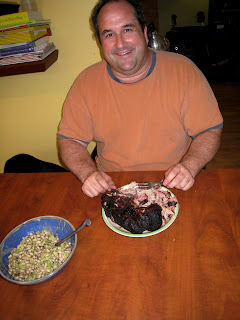 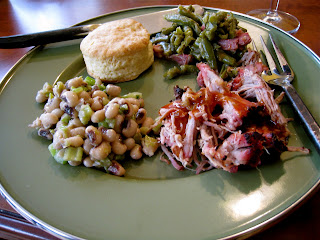 Sarah made some luscious Southern slow-cooked green beans with ham hocks, black-eyed peas and a peppy vinegar-hot pepper sauce to go with it. I brought the biscuits which were fine, but we all agreed that a slice of squishy Wonder bread would have been better since that is what you'd get with pulled pork in the South.

The meat was fantastic--smokey, tender, moist. There was not a scrap left at the end of the evening and I felt bad that after sweating over the smoker all day, Brian didn't get to look forward to left-over pulled pork sandwiches the next day. (On a related note, there's a wonderful blog entry about "smork"--smoked pulled pork--here.)

Between meat-fests Sarah, the non-crazy Brian and I did a little research in the form of the "blue plate special" on Thursday nights at Zingerman's Roadhouse: 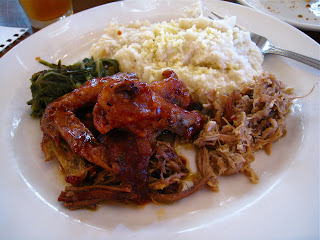 Starting at the left and going clockwise are: pulled pork, brisket, wings, greens and cheese grits (the plate usually comes with mashed potatoes, but I much prefer grits with this line up). It was pretty decent--I liked their brisket best of the meats, but maybe it was just the fact that it had a nice kicky sauce. Their pork was nowhere near as tender and moist and smokey as Brian's. What I really enjoyed were the sides: excellent greens and grits. But then before trying Brian's pork, I never really understood why meat was everyone's focus--a big plate of Southern side dishes is my idea of (artery clogging) bliss.

The second meat-fest we were invited to was to try the Texas-style brisket: 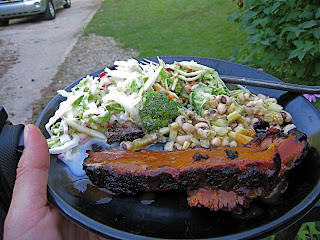 From the left: black eyed peas, the glorious brisket, napa cabbage buttermilk slaw, and broccoli slaw. Not pictured is the slice of Wonder bread (yup, I brought a loaf this time) that I used for brisket eating.

Can you see the pink-ish smoke ring on that brisket? Yum. If forced to choose, I'd say I liked the pork marginally better than the brisket, but I think I might just be a bit more of a pork person than a beef person (cue Jewish grandparents rolling over in their graves...). And I certainly am happy to eat brisket when pork isn't on the menu!

So now the question is what meat product we should pester Brian to smoke next? Suggestions anyone?
Posted by Kate at 8:33 AM

turkey or whitefish - but neither are meat, per se.

Hopefully this will please MY Jewish grandparents and great-grandparents, but I do try to skip pork :) :)
Good BBQ like that of which you posted makes it difficult though!!

Turkey would be yummy....

RIBS Baby! Ribs! (Baby back) Then: Salmon, chicken till it crackles and falls off the bone.
Oh my God I'm hungry.

I love my smoker and can get some beautiful pink rings out of it. I like to do burgers and chicken and wings (oh the wings) and sausages and ribs and well you get the idea. oh yes and peppers and bread and corn and mushrooms ok ok I will stop now.

Whos left are you talking? :)

Thanks for the wonderful compliment! Its is great fun cooking for friends. I never knew that joy until very recently