A friend whose son goes to another Ann Arbor public school, one that is really well regarded and not a struggling school by any stretch of the imagination, told me that they started MEAP prep in the second half of 2nd grade and that her son's teacher had to cut the dinosaur unit from their curriculum in order to get in enough test prep. This just breaks my heart (she was very disappointed about this too).

In her weekly note last week, the Principal at my son's school wrote a strong statement about how standardized tests are contrary to the holistic program at the school but that, darn it, the kids have to take the thing. The preparation for the test consisted of showing the kids a sample test a couple of weeks ago and telling them to get a good night sleep and eat a good breakfast. I'm trying to take a similarly resigned-but-supportive attitude, but since my kid is a lousy sleeper and eater, I gotta admit that I do feel a little tense.

So I'm doing what I can and am churning out batches of mini banana chocolate chip muffins (without the ground almonds and with soy instead of cow milk to accommodate allergies) for the kids to snack on between testing blocks. 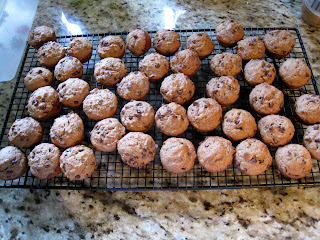 So hey, my house smells great and for all I know, my kid is quirky enough to think that the test is fun!
Posted by Kate at 3:17 PM

Heh. I spent my lunch hour running downtown to get Braille MEAPs for my kiddos. Good times, that.

I understand that we have to have tests--we had the Iowa Basic Skills tests back in the day--but I hate the way the government relies on the stupid test scores. And I hate that my special ed kids have to take them...they were stressed out all day. :( The reality is...most special ed kids don't pass, simply because most special ed kids aren't at grade level. And come on--I'd like to see the authors of the NCLB thing take a 3 hour test in Braille!!!

The MEAP isn't really going to affect your son one way or the other - just the school, so there's no worries there for him.

In the meantime, I'm sure he'll enjoy those muffins!