You might think that a sweater jacket made of chunky yarn would be irrelevant in April.

You would be wrong: 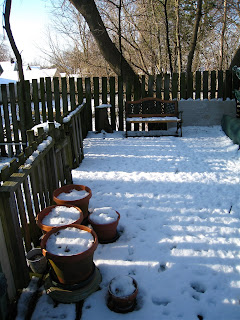 This is the view of the back deck. 6 inches of this crap fell on Sunday night and led to a snow day for the critters on Monday. In April! The snow was like wet concrete and broke some branches off of the large lilac (which was already budding) in the yard. I had already packed away the critters' winter boots in the attic and had to go rummage around and retrieve them. Grrrrr. It had better melt before Friday when the kids' spring break begins because I want to spend as much of next week as possible out of doors.

But the shit-load of snow was a motivator. I finally faced my zipper fear and finished my Urban Aran Cardigan. And I think it turned out pretty well.

The best decision I made was to double the length of the collar, fold it over and sew it down on the inside. This has given it enough heft to stand up properly and not flop outwards and look messy: 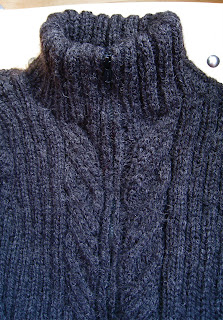 I got the idea for the collar trick from this zipper installation tutorial. I didn't actually follow her method for zipper installation though. I ended up basting the two fronts together using red scrap yarn. Then I pinned and basted the edges of the zipper to the cardigan (using hot pink thread so it would be easy to see when removing). Then I pulled out the red scrap yarn and sewed the sweater as close to the zipper as possible. I did all the sewing by hand because my sewing machine and I do not have a very trusting relationship. It took a little experimenting to find the best distance for the seam which would cover as much of the zipper as possible without letting the wool get caught in the teeth. Then I went back, pulled out the hot pink basting and sewed down the edge of the zipper (with black thread).

A knit buttonhole band would be much faster to accomplish, but I do really like the feel of the zipper with this particular sweater. It makes it more like a lightweight jacket. And, unfortunately, it looks like I'll get some wear out of this particular garment before packing it away for the summer.
Posted by Kate at 8:01 AM

Thanks for your notes on the Urban Aran Cardigan. I am working on mine and think your collar modification is spot on. I hope to have mine done for next winter (knitting will be done soon, zipper fear will take up the remaining time...)

Cool. Hope you wear it around soon so i can see it in live action.

love the sweater and the collar looks great