There is a lot to love about this time of year in Michigan. Everywhere you turn there is hope being expressed in the plant world--lilacs galore, lilies of the valley popping up, violets that have invaded the lawn growing so thickly that you don't even feel bad when they get mowed, even rain that comes when you need it so that you don't have to drag your lazy ass over to the vegetable garden to water it.

But there's another side to Spring that is perhaps a little less commented upon: impatience. Particularly in the area of food.

When all the flowers are blooming, I don't feel like eating winter squash again or a mealy apple that has been in storage for months or yet another handful of dried apricots. My taste buds are eager for the fresh taste of new produce. Yes, I've been eating asparagus. Lots of asparagus. Truth be told, I'm getting a little sick of asparagus. And there are some greens available at the farmer's market, though the ones in my garden are still super dinky. But petulant little me also wants fruit and for that I am really out of luck--I have been indulging in the occasional Costa Rican pineapple (look! a fruit that is better traveled than I am!) but local strawberries won't be in for another month and stone fruits are in the blossom stage right now.

The other day I had one of those cravings that knock you backwards--I had to have a fruit tart. And I didn't want apple. I considered lemon but decided I wanted something with a little more substance (See, that's why I do all the cooking around here--my cravings are a royal pain-in-the-ass but at least I'm doing all the work. I can't imagine how unsatisfying it would be to cook for me on a regular basis because someone else's efforts might not match up with my hankerings. Perhaps a teeny weeny control problem? Picky bitch? Moi?)

Thankfully my recent effort to clean out the freezer meant that I was aware of a bag of frozen blackberries that had been in there for god knows how long. I Googled blackberry tart, looking for a recipe but every one I found was of the fresh-berries-on-top-of-pastry-cream variety, not something my mushy frozen berries could pull off.

But then my memory came through. I have a spotty relationship with my memory: it is good at pulling up quotations from books that I read when I was 12. Useful, eh? Because we all get assaulted on the street regularly with demands for quotations from Steinbeck's East of Eden (my favorite book when I was 12). But phone numbers? Bah ha ha ha! I have had my cell phone for 2 years and still have no clue what its number is. I am continually amazed that the major utilities companies expect me to know the last four digits of my husband's social security number. Sorry folks, I usually have to look up my own SS #. But hey, back to what my memory does well: In addition to quoting sections of Richard II to you totally out of context, I can remember flavor profiles.

Way back in September 2005 I posted a photo of a raspberry tart that Sarah had introduced me to in May of that year. I don't think I've made this tart since 2005, but my taste buds hadn't forgotten it. The recipe calls for fresh raspberries, but that fruit gets baked with a custardy sort of goo so I thought that a frozen berry with little more structure--like a blackberry-- that wouldn't collapse when thawed might be able to be substituted.

Guess what? I was right! (Allow me to toot my horn for a second here folks, because this doesn't happen very often. Toot toot!)

I present to you the impatience-buster tart: for when you need the flavor of summer but still have to wait. 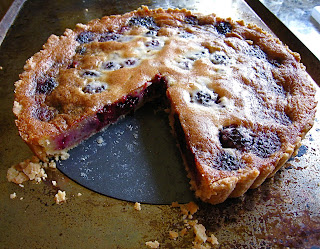 Browned butter is a key flavor component here, both in the filling and in the crust. It gives the tart a depth that balances out the sweetness. So despite the fact that you are impatient, don't skip the browning butter step.

One mostly-baked tart shell--I highly, highly recommend trying this wacko way of making a tart shell shared by David Lebovitz on his blog. It works. Really. That's it in the above photo.
6 tablespoons unsalted butter
1 large egg plus 1 egg white
1/2 cup sugar
1/4 teaspoon table salt
1 teaspoon vanilla extract
grated lemon zest from half a lemon
juice from half a lemon
2 tablespoons flour
2 tablespoons heavy cream (or creme fraiche, or sour cream)
1 lb bag of frozen blackberries (I used Trader Joe's), defrost and drain them in a colander

Make your tart shell and bake it until it is mostly done (I baked mine for about 11 minutes so that the edges didn't get too brown--it is going back in the oven after you fill it and you don't want those delicate edges to burn).

Distribute the thawed and drained blackberries over the bottom of the cooled tart shell (pat the berries with a paper towel if they are still kind of wet). Pour filling mixture evenly over berries. Place tart on a baking sheet in the oven. Bake until the filling is set and does not jiggle when shaken, and the surface is puffed and deep golden brown, about 30 minutes. Cool on wire rack to room temperature. Remove tart pan ring. Cut into wedges and serve. 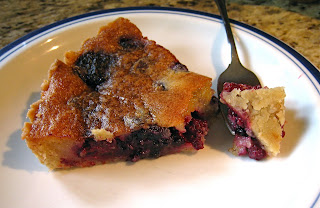 I may have to try this with the last of the locavorious blueberries. And yes, I can so relate to this post, including the points about asparagus.

You are berry smart. yum,yum.