I had been having so much fun knitting this: 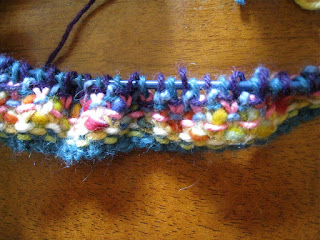 Until I did this: 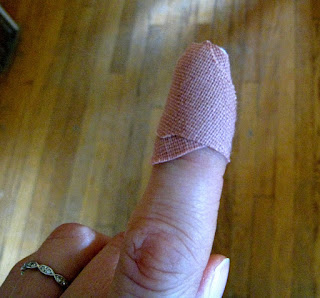 I know--it looks pretty contained now. I dare not show under the bandage for fear of causing nausea of extreme proportions. There is a chunk of my finger tip missing thanks to poor attention to my chefs knife while chopping scallions last night. I dabbed/poured some liquid bandage over it in an effort to help my overwhelmed platelets and stop the constant drip of blood. (That stuff stings like hell, let me tell you; I was able to track exactly where the nerve that starts in my finger tip is located all the way up my arm and where it connects to my spinal column because as I put the stuff on the entire thing felt like it was on fire.) Blood bubbled up under the liquid bandage and then the stuff hardened and I went around with a big lump of blackening, drying blood hanging off my finger that Brian got squeamish just looking at. But at least it meant no trip to the ER for stitches. Right now I feel my pulse throb-throb-throbbing in the missing wedge and my typing? Ha--I'm back to pecking at the keyboard with my right index and left middle finger. And screwing up royally.

So I'm a little pissed at myself since the injury is messing with my writing and cooking and also means having to take a forced pause in the above knitting project which has got to be the best stash buster ever. You can see the pattern and read about the inspiration here and if you are a Ravelry member you can see the gorgeous completed versions in the project gallery. It a great way to use up ends of skeins and those stray balls of yarn that you aren't quite sure where they came from but also that you don't have the heart to get rid of. Stuff that looks dull as dishwater when by itself suddenly becomes interesting when combined with other scraps.
Posted by Kate at 8:43 AM

Oh Kate - how awful! I hope you heal quickly and the throbbing subsides soon.

sometimes stitches are a good thing