I need some help here people. I discovered an amazing sausage throw rug on the internet that I can't afford and want to try and reproduce before October 7th, the date of Brian's birthday. Or if it was a really labor intensive process, it could be pushed back to Christmas.

Actually there are 4 different rugs. The Ham Sausage is pretty, but since I've never eaten Ham Sausage (Biershinken), it doesn't appeal quite so much as the others. 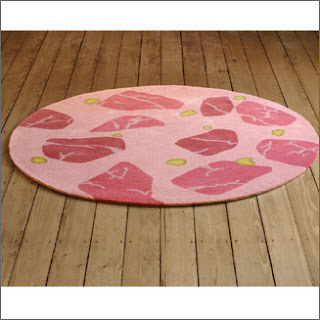 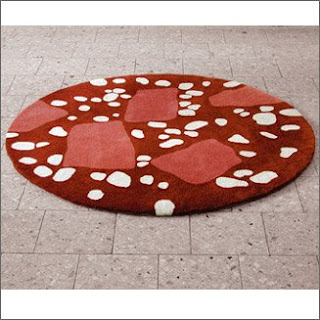 Culinarily, I'm a Soprassata girl through and through (and I also think it is quite attractive): 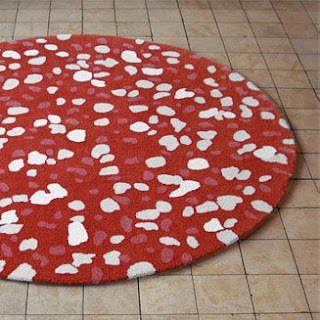 I don't mind a taste of real Mortadella now and then but it doesn't strike me as "meaty" enough, though I do think this one is mighty pretty with its little floating bits of green pistachio and peppercorns: 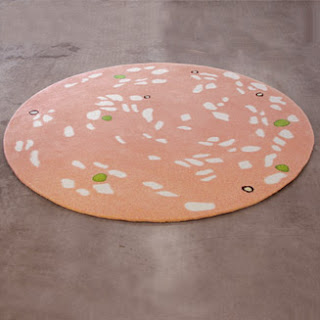 So help me out, people. Is there anyway I could make one of these? I remember doing a rug-hook kit when I was about 9 years old (a hideous picture of an orange and brown mushroom on a lime green and yellow background--ah the colors of the 70s!), but I think that might look too fuzzy and fuzzy meat is not a good thing, I think. Maybe I could knit and felt something like this then sew it to a canvas backing? Actually what I think would probably work best is felted crochet (at which I suck, but hey this would be an inspiring way to get over my hangups). I saw this amazing crochet portrait in Craftzine and the technique looks adaptable to meat products.

I think I'll have to face down my crochet fears sooner or later because I'd really like to make Monster Crochet's awesome bacon scarf. You can knit it using intarsia, but the good thing about the crochet version is the back looks as good as the front, which cannot be said for a knit version.

In a more general note, crafty goodness has not been hovering around this household. In fact, I'm in a crafty funk. My knitting projects are not keeping my attention--I'm part way through two different items and have been ignoring both because I'm tempted to rip them out. I haven't started the Gathered Pullover even though I bought the pattern because of the color of my yarn--knitting with dark purple seems like it would be pleasant in, say, November. But the color turns me off in the middle of summer. About all I've done on the crafty front is a couple of lame beading projects with the girl critter. So I'm hoping some meaty craft project will get me going again.
Posted by Kate at 6:08 AM

A very good friend of mine crochets..let me know if you want me to put you in touch w/ her.

And let me just say that I latch-hooked that very same rug!!!

PS: That rug is outrageously expensive. I can't believe they are charging so much! Sheesh!

Could you make one of those old fashioned "rag" rugs?

Granny always made them. They were a good way to use up old fabric and seemed to last for generations.

Would he like the bacon scarf, since knitting seems to be more your interest? I'm the uncraftiest person in the universe, so I'm not really any help here.

Hey Jen--I bet I could knit a bacon scarf, but the problem with knitting is that there is a "wrong" side which looks like hell but crochet manages to have two good sides. So if I did a bacon scarf I'd have to knit two sides and sew them together and I might go insane from that much intarsia knitting...

Patti--so glad that someone else had taste that was just as hideous as my own when we were young!