Revenge of the spurned appliance

I guess I swore at it one too many times. 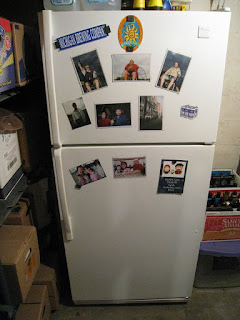 --I would be done bitching about this particular appliance. But no. The damn thing took revenge upon me.

I stashed some of this week's farm share in its dinky, rickety produce drawers until I was ready to use it. But when I went down yesterday to get it I found that the-fridge-that-I-hate took out its wrath on my beet greens and some of my rainbow chard by FREEZING THEM. And this is when it is on its warmest setting! Sigh.

It seems to be doing ok at its main job which is keeping one particular batch of Brian's home brew from exploding all over the basement. He made a dark beer that somehow over fermented so that it has a tendency to blast its way out of the bottle; we dubbed it "Dark Angry Father." It's really tasty, but dangerous stuff. We gave a bottle to my dad and did not emphasize strongly enough that he should immediately refrigerate it with the result that--Whoops!--he had to clean beer off the kitchen ceiling...Even the properly refrigerated stuff has to be opened over the sink and into a wide pitcher because of the exuberance of the foam.

So, you might be wondering what is upstairs now that the appliance banishment has occurred. Allow me to introduce you to: 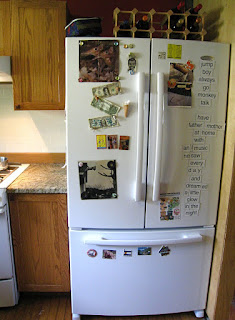 The Fridge That I Love
Yes, the Elephant Shrews have made their home in the top left corner and the boy critter wrote a poem about himself on the right side.

I've already noticed at least 4 times in the last week that when I looked for a particular condiment in the-fridge-that-I-love, what do you know, I found it! All without kneeling on the floor, knocking other condiments off shelves, or swearing!

I bet the-fridge-that-I-hate heard me making kissy noises at the new fridge. As I will still be availing myself of the extra freezer space in the banished fridge and the occasional use of the refrigerator compartment, I will tread warily around the thing. Who know what it has planned next...
Posted by Kate at 3:11 PM

I wish we had a new refrigerator. Ours leaks water and freezes most veggies.

Not sure what the problem is.

Mr. Right Now doesn't seem to have a viable solution yet.

All this talk about homebrewing and 'The Revenge' got me thinking about a little dual purpose equipment. Williams Brewing (and I'm sure many others) sells a temperature control unit that may make that lousy ol' fridge behave - see it here: http://www.williamsbrewing.com/CONTROLLER_II_P183C100.cfm

Hey - it's cheaper than a new fridge AND Brian could brew some lagers!

oooo--cool gadget! Brian has been wanting to do a batch of lager.