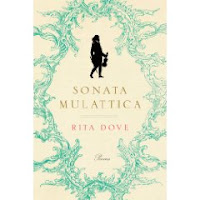 I think that writing about poetry is hard because my prose feels so clumsy, so heavy and earth-bound, after reading poetry. But I'll have to give it a go.

Exquisite: that's the word that comes to mind when I think of the book I finished recently, Rita Dove's Sonata Mulattica.* I tried to cobble together my own summary of the book, but let's face it, The New Yorker already crafted a fine summary:

Dove’s verse sequence re-creates the life of the biracial violinist George Bridgetower, best remembered for being the first performer, and the initial dedicatee, of Beethoven’s “Kreutzer” Sonata. ....The book remains highly accessible, reading much like a historical novel. Dove is fascinated by Bridgetower’s life as a black musician...[but] she is concerned equally with the status of musicians in a world of precarious patronage—even Haydn, at the Esterhazy estate, has “no more leave / to step outside the gates / than a prize egg-laying hen”—and with “the radiant web” of music itself.

Dove's book reminds me of another of my other favorite books of all time (still a part of my top ten list!), Michael Ondaatje's The Collected Works of Billy the Kid. Both use poetry rather than prose as a means of creating a portrait of a historical figure. The shifting gaze and varied rhythms of the poems makes the portraits more vivid to me than a linear prose biography or novelization. The lives of interesting people are messy and don't always make sense and a series of poems is the perfect medium with which to express this. This is particularly true in the case of Dove's subject about whom the historical record is fragmented at best. While I understand the value of communicating facts in clear narrative prose, these two books make you feel the history rather than just intellectualize it.

Both books are painfully beautiful--I found myself forgetting to breathe while reading some of Dove's poems and only realized that I'd been holding my breath at the end of the poem when I had to gulp for air. Dove's book keeps from putting the reader into lyrical overload by also being funny and playful, sarcastic and sad. She creates such a kaleidoscopic portrait of George Bridgetower that, like Ondaatje's Billy, I find him haunting my thoughts. Of course there are poems about race and I noticed that the book was shelved in the Black Studies section of the library. I would also like the library to buy three more copies and to file them in the poetry, biography and fiction sections. The themes of the book are so layered that it defies simple categorization: it's about relationships, about why people compose and why people play music, the tensions of patronage and fickleness of society. It is about admiration and jealousy, grandeur and pettiness.

To get the most out of this book I would recommend two courses of action. First, get some music. The playlist should include plenty of the two composers who are featured in the book: Haydn (that's "Papa" Haydn to George) and Beethoven, particularly the Violin Sonata No.9 in A Major, Opus 47. But it also might be good to add in a little Bach, Mozart and Handel. I found listening to them helped me appreciate how radical Beethoven must have sounded to his contemporaries. Second, read the chronology located at the back of the book. This will set out the time line and help to clarify the voices of some of the minor characters--people who witnessed Bridgetower or Beethoven. Their poems provide refreshing perspective on the main characters but could be confusing if you can't place the voice.

Of course, the most intense poems were the ones where Bridgetower contemplates Beethoven and vice versa because they lay bare the particular intimacy between the musician and the composer. Here is Bridgetower commenting on Beethoven as he sight reads the Violin Sonata No.9:

He frightens me. I've never heard music
like this man's, this sobbing
in the midst of triumphal chords,
such ambrosial anguish,
jigs danced on simmering coals.
Oh, I can play it well enough--hell,
I've been destined to travel these impossible
switchbacks, but it's as if I'm skating
on his heart, blood tracks
looping everywhere, incarnadine
dips and curves...

Beethoven's view of Bridgetower is also shot through with the anguish he feels at going deaf. His experience of watching Bridgetower play his compositions almost transcends sound itself:

I was careless then, I squandered the world's utterance.
And when my muddy conspirator swayed and quaked
like the tallest poplar tossed by the lightest wind

so that I could read his playing, see my score
transcribed on the air, on the breeze--I breathed
his soul through my own fingers and gave up

trying to listen; I watched him and felt
the music--it was better than listening,
it was the last pure sound...

At the end of Dove's interview with Diane Rehm, she mentioned hoping to record an audio version of the book. The only thing I would like more than re-reading this book, is listening to Dove read the poems to me.
_________________
*I heard Dove on the Diane Rehm Show (you can hear the interview here) and immediately requested the book from the library.
Posted by Kate at 11:10 AM