No one expects me to do much with this week's beautiful produce: 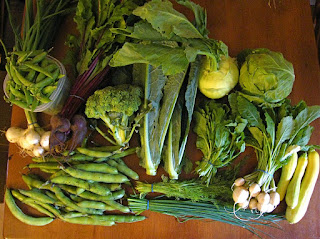 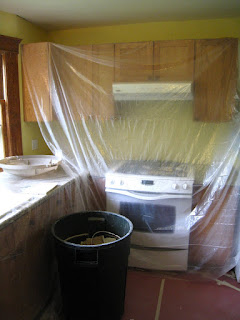 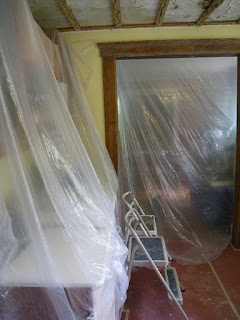 Brian has the week off and we are doing all sorts of pain-in-the-ass messy jobs in the kitchen. We've replaced the one piece of damaged drywall in the ceiling and I am on my third coat of mudding and smoothing the joints. Brian is about half-way done with stripping the woodwork which someone did a half-assed job at (there are still little flecks of gray and white paint). Thankfully we discovered a fantastic product that makes this particular task much less onerous: Removall. I saw someone raving about it on a This Old House show a long time ago and thankfully remembered the name. I had to mail order it but it was worth it--you can apply this stuff with your bare hands which isn't something I'd dare do with traditional paint remover! The smell isn't horrific, doesn't cause headaches (at least in my wee head) and best of all, the stuff really works. I can't understand why no home stores carry the stuff.

We'll also be putting up crown moulding, repainting the walls and ceiling (not sure what color yet....decisions to be made...opinions welcome...) and dealing with some wall and ceiling gaps that have been in existence since we replaced a built-in cabinet years ago. I'll be tiling the back splashes (white subway tile) though that might take place after the tarps are gone and the kitchen is semi-functional again since tiling isn't nearly as messy as drywall. There's probably more picky little stuff I'm forgetting.

So the produce isn't going to be fussed over this week: I plan to uncover the stove briefly this evening and make a "share box" pasta in which I chuck in just about every vegetable I lay my hands on. Then I'll prep some salads using the kohlrabi, cabbage, arugula (not together) that can be pulled out and eaten between coats of paint.
Posted by Kate at 6:55 AM

You absolutely rock! I also have a farm share at Tantre, but there is no way that between kids and stuff that I could ever keep up with this the way that you do! Keep it coming!!!

Well, life does intrude on farm shares from time to time. That's another thing I'm enjoying this summer about splitting our share.

I had a great lunch today of one of the summer squash, some of the kale, a few of the snap peas, one of the onions, some of the broccoli, stir fried with some tofu and asparagus and then I put in a TBS of Soy Vey. It was fast and good.