Munch your way through Montreal

Let's start with a dramatic shot: 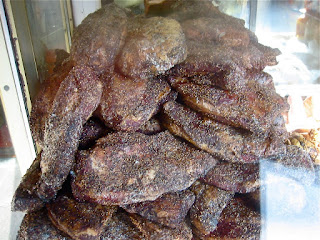 That's a huge pile of smoked meat, the Montreal version of Pastrami, at Schwartz's. All the guide books warned us that there would be lines down the block--they clearly weren't in Montreal in November! We waltzed right in and found a seat and moments later were looking at this spread: 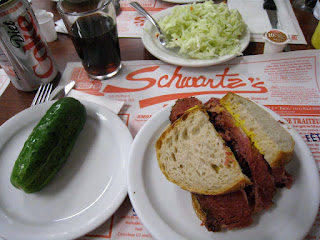 Classic smoked meat sandwich on rye with mustard, half-sour pickle, coleslaw and diet coke (I know, it should have been a black cherry soda to be authentic, but I needed some caffeine.)

And then we dug in: 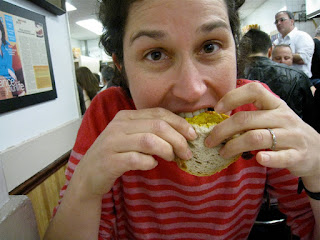 Thanks to Brian's photographic efforts, I have discovered that I often eat tasty things with my eye brows way the hell up: 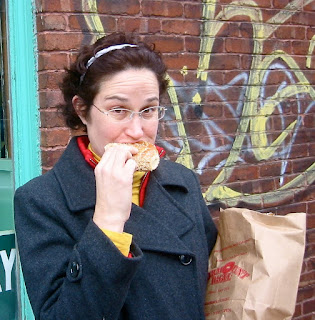 Fairmount Bagels: I'm cuddling the other 11 which are still warm and are like carrying a bagful of kittens (except you can eat them!) Montreal bagels are boiled in a water and honey bath and the sweetness on the outer crust is very nice.

We indulged in a little French bistro food at L'Express: 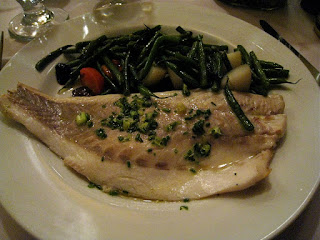 The bass and green beans were delicious but that is probably because they were sauteed in about a pint of clarified butter and cardboard would taste good with that treatment. I had a glass of Pouilly Fumé and a tasty octopus and lentil vinaigrette appetizer but the photo didn't come out because for about 15 minutes the restaurant lost all power. They seemed to expect it (and we saw a big Hydro-Québec truck parked on the block) and had candles ready but it made for lousy picture taking.

There is a big Vietnamese population in Montreal which led us grab the occasional Bánh mì sandwich for a snack and to indulge in big bowls of Pho, 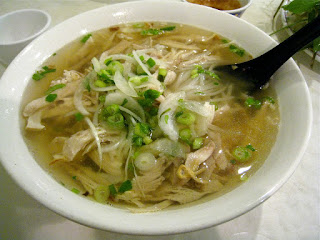 with copious quantities of basil and bean sprouts to stir in. 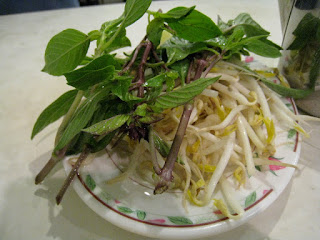 There is also a food phenomenon that I ardently wish we could persuade to come to Ann Arbor: Portuguese Chicken. 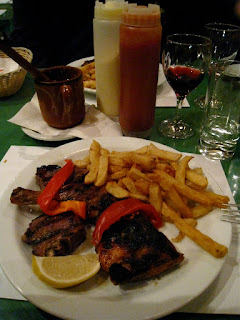 Here it is, with a couple of really delicious loin lamb chops. Doesn't look like much: grilled meat with fries, right? But oh, how wonderful the seasoning is. The mug in the background contains extra marinade so you can really douse your food in it--tangy, spicy, umami. Yummy. (The fries, which were super fresh and crisp and hot, responded particularly well to a dousing in the marinade followed by a little dip in mayonnaise. Mmmm: fat with salt and then a little more fat!) Oh, and it's pretty cheap too. There are a whole bunch of Portuguese chicken places in Montreal and, were we lucky enough to live in this city, I can imagine it being our take-out stand by for those crazy days when no one has time to cook.

The only food area that I wasn't thrilled with was the lack of patisserie on every corner. Actually, the lack of patisserie on any corner. There were a few bakeries that we saw, but they were really more bread oriented, not the individual elaborate pastries that are everywhere in France. So, other than a strange and delicious creation that I will cover in my next post about Montreal beer, we hardly had anything sweet.

Then again, with my salt tooth, I'd go for a smoked meat sandwich over a mille-feuilles any day.
Posted by Kate at 7:58 AM

It appears that you had a "wonderful" time in Montreal.

Your readers want to know if another munch is in the plans for the December holidays?