As I mentioned in my Montreal food post, we did some pleasant sampling of various beers while we were on our trip.

On our one evening in Toronto, we visited the Beer Bistro. It's a really lovely spot with a terrific range of beers on tap (click here to see a mostly-legible photo of the beer menu): 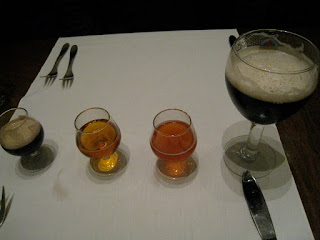 My samples were of three excellent Canadian beers: St. Ambroise Oatmeal Stout, Durham Hop Addict and Ephemere Cassis. If we hadn't been going to a play afterward I would have followed these with a full size of the St. Ambroise. Brian's was a Leffe Brune. 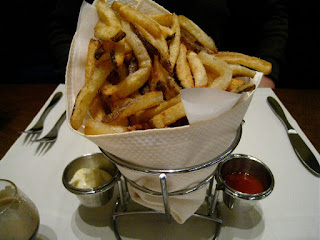 I wasn't as impressed with the sandwich I ordered which was a shaved lamb and blue cheese panini--it was just kinda greasy.

Montreal has a number of good places to try local and non-local beers. I loved the bar decor at Le Cigare du Pharon where we had these lambic beers. It's a Belgian place and is covered in Tintin memorabilia. Brian and I had fun identifying different scenes and witnessing someone else's obsessive trinket-collecting habits. Unfortunately it was too dark to get photos of all the quirky stuff without bugging the crap out of the other patrons by using the flash, but here are the beers: 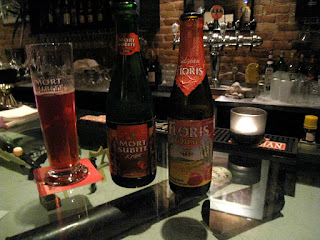 Brian's Mort Subite kriek (cherry) and my Floris fraise (strawberry). Mine had 25% strawberry juice and was less dry than I expected though it still managed a nice crisp finish.

Conveniently located right around the corner from our hotel was a branch of Les Trois Brasseurs. I tried their Brun and Amber and thought they were both pretty tasty, though not super memorable. 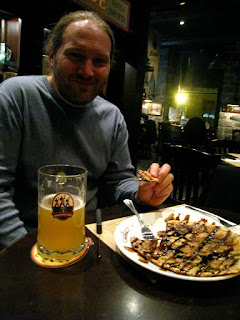 Brian is drinking the White in this picture which I did not care for--I thought it had way too much coriander in it so I couldn't taste anything else. But tear your eyes away from the beer and focus on what he is eating: a banana chocolate tarte flambee. We've had the classic tarte flambee when we were in Strasbourg: creme fraiche, onions, and bacon on a thin crust that is a cross between a pizza and a cracker. But I've never had a desert flam and this one was fantastic. I thought Brian was crazy when he ordered it, but I was won over with my first bite and am now a determined to make it at home. It seems pretty simple: crust, bananas, cinnamon, some sugar and a dark chocolate sauce drizzled on after it comes out of the oven. If I figure out a recipe, I'll be sure to post it here. And if I can locate the St. Ambroise Oatmeal Stout around here, I'll serve it with this.

Sadly we did not get to sample the wares at Dieu du Ciel or Reservoir. We got to Dieu du Ciel an hour before they opened and were too tired to wait around. Ah well, next time. We loved Montreal so much that there definitely will be a next time.
Posted by Kate at 10:08 AM