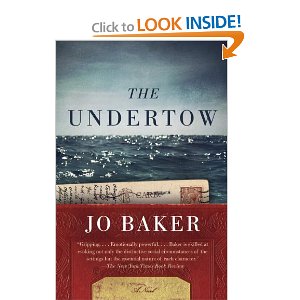 A good book in Winter is satisfying in a way that a good book in Summer just can't compare. So I feel very  lucky that I just finished reading Jo Baker's The Undertow now and not, say, in July. It would still be good then, but this is the perfect book with which to curl up on a couch on a chilly gray day and sink in.

The book follows four generations of a family from WWI to 2005 and I couldn't pick a favorite character, there were so many who won me over, even if, later in the story, they were shown from another character's perspective to be seriously flawed. I think the moment that will stick with me most is the one in which Ruby in WWII London takes what could have been a completely traumatic experience and reshapes it so that "even though it is now over, things had been, for just a little while, how they should be."

It's such a relief to find an author who doesn't want to convince you of the crumminess of the human race. The characters in this novel are all flawed, but rendered so sympathetically and with such kindness that I understood and forgave all of them their weaknesses. There were many places where a different author would have made choices that would have brought more dramatic crises into the plot and I was relieved each time that Baker did not--the worst possible outcome for each segment would have been flashier, but also easier. And though one character does die in a horrific way, it turns out that this is not the worst possible outcome for the rest of the characters: that possibility looms later in the book and still, Baker doesn't succumb to the temptation to throw her characters off the deep end. I think it is harder to make the non-extreme choice and still make it compelling and interesting.

I really hope that this book is successful enough to get the publishers to issue all her previous novels in the US. They have issued The Telling  and plan to issue her next book, called Longbourne (a retelling of Pride and Prejudice from the servant's point of view) later this year. Based on the popularity of the subject matter for the latter book, it will probably sell really well. So I have hopes of someday getting to read The Mermaid's Child, and Offcomer. Though if they drag their feet, I might just have to order copies to be shipped from the UK.
Posted by Kate at 10:50 AM

Okay, I've just put this on hold. And if you can't wait for more, there's always book depository....