Let us celebrate the return of cake to this home!

We had a birthday here last weekend and for the first time in five years I made a cake for my family*! I should explain that the cake boycott has not been of my choosing, but of the critters. My strange children have expressed distain for cake in just about any format. They are ice cream kids all the way. So usually birthdays involve make-your-own sundaes.

The boycott may also have a teensy bit to do with my holding a grudge. At the girl-critter's 5th birthday  party I knocked myself out, making Mexican chocolate cake with swiss buttercream frosting (yeah, the kind where you are handling boiling sugar syrup and which results in the best frosting ever) and she wouldn't even taste a tiny crumb.

So I was a little bit dubious when she asked for a specific cake this year. Last year, her class studied Panama for their school-wide multicultural fair and one nice parent brought in a Tres Leches Cake to the class. I credit the positive side of peer-pressure for the fact that the girl critter was willing to taste it. And surprisingly, she loved it. When I looked up the recipe, I dragged the critter over to the computer and, with a voice laced with incredulity, said "Really? That's what you want?"

I know I've kvetched here and on my blog solely devoted to their food-weirdness about all the normal things they won't eat, but I don't know if I ever mentioned their aversion to whipped cream. How can you hate whipped cream??? But every time they have been confronted with it, they have diligently scraped off every offending bit (and I, just as diligently, scoop it into my mouth). So when I saw that all the recipes for this cake dictate topping it with copious quantities of whipped cream, I was a little dubious.  The girl critter squinched up her nose when she heard what the cake topping was, but was game to have me make it.

So I did and didn't even stock up on ice cream in case she got cold feet.

Oh my god, is this ever good cake: light and rich at the same time, and super, super creamy. 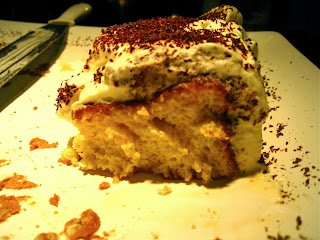 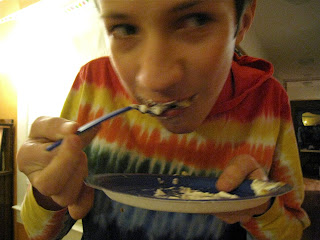 I think only one kid at the party totally turned it down and one more complained that it was "wet" which is an accurate description.  Essentially, you make a cake that is like a big dry sponge and then soak it with the three milks of the title: heavy cream, sweetened condensed milk and evaporated milk. 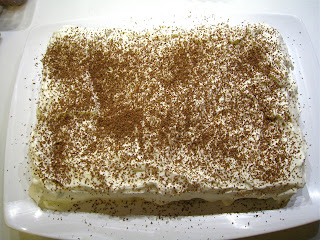 Then you frost the whole thing with lightly sweetened whipped cream. The traditional topping is a little half of maraschino cherry on each slice, but my critters hate cherries so I grated a little bit of bittersweet chocolate over the top. I expected it just to look nice, but the little touch of chocolate was surprisingly (and in my opinion, welcomely) prominent.

The recipe I used was this one from The Pioneer Woman Cooks blog. The only change I made was the aforementioned chocolate gratings rather than cherries and I added 1 teaspoon of vanilla extract to the whipped cream topping. Otherwise, I recommend going and following her very entertaining directions.

I am a little bit proud of my idea for what to do with the leftover three-milks cake-soaking stuff. You'll have anywhere between 1 and 2 cups leftover (depending on how much your particular cake is willing to soak up) so instead of throwing the stuff away, I stuck it in the fridge and made french toast with it a few days later. Left over milks + two eggs = really good, sweetened from within (no syrup necessary) french toast.

________
*I've made cakes for other people since then--it isn't as though I've been in a cake-less wilderness--but my critters have never chosen to sample them.
Posted by Kate at 8:58 AM