Soup to soothe the stir-crazy soul


It is April 20th and there is (albeit a light dusting of) snow.  This is not welcome when I'm at the "ugh" stage of the year in relation to preparing dinner.  Spring may have officially come, but I'm sick to death of root vegetables. I'm even sick of my favorite winter comfort dinner (homemade mac and cheese, lots of kale with garlic and lemon, and roasted beets).

I was digging through my recipe binder and came across this soup and there's something about the abundance of spinach and the saffron in the broth that keeps it from feeling like another damn winter soup. It's still pretty hearty, but it gives some hint that seasonal warmth may be coming.

The original recipe is from the New York Times and, in my view, it is unnecessarily complicated. There entire first step seems unnecessary to me: they have you blanch all the spinach, save the water that it is blanched in for the broth, and then add it back in at the end. Maybe their soup ended up a little brighter green in color than mine, but I chucked this advice and instead just added the (fresh) spinach to the soup at the very end. It cooks in the broth and you get rid of one finicky step. And as you can see below, it doesn't produce spinach the color of mud. 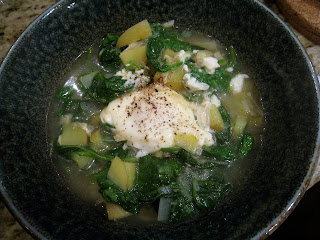 That's green enough for me.

The other thing I changed from the recipe was their instruction for the baguette and cheese. They say sprinkle the cheese on top of the egg and serve with baguette. I say, layer some baguette in each bowl, top with the gruyere and then ladle your soup over the top. 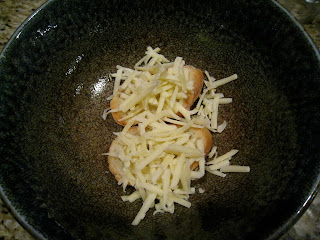 That way you get surprise gooey-cheesy bread under your top layer of soup which, along with the saffron in the broth, was probably my favorite thing about this recipe. This also means that if you only have slightly stale baguette around (or other farm/rustic-type bread) and don't want to go to the store, no one will ever know!  Next time I make it, I plan to rub these slightly stale bread pieces with a cut garlic clove before plopping them in the bowl because that just sounds like it would make it even better.

Spinach, Saffron Soup with Egg
adapted from this recipe in the New York Times
(they said served 6, I thought 4 was more realistic)

1 pound baby spinach, rinsed
2 tablespoons extra virgin olive oil
1 onion, finely chopped
2 leeks, white and light green parts only, cut in half lengthwise and rinsed of all grit, then sliced thin OR 1 C of Trader Joe's frozen leek slices, thawed
Salt to taste
6 garlic cloves, minced
1 pound Yukon gold potatoes, cut in thin slices
A bouquet garni made with a bay leaf and a couple of sprigs each thyme and parsley (and if you have it, a fennel sprig)
Generous pinch of saffron
Freshly ground pepper
4 eggs (unless you are going to serve small portions to more people, then one egg per person)
3 ounces Gruyère cheese, grated
thin slices baguette or other rustic bread, rubbed with a cut piece of garlic

1. Heat the olive oil in a large, heavy soup pot or Dutch oven and add the onion and leek. Cook, stirring often, until tender, about 5 minutes. Add a pinch of salt and the garlic, stir over medium heat until the garlic smells fragrant, no more than a minute, and stir in 2 quarts of water, the potatoes, bouquet garni and salt to taste. Bring to a boil, add the saffron, and turn the heat to low. Cover and simmer 20 to 30 minutes, until the potatoes are tender but still intact and the broth is fragrant.

2. Stir in the spinach, cover and continue to simmer for another 10 minutes. Add pepper, remove the bouquet garni, taste and adjust seasonings.

3. Keep the soup at a bare simmer. Break each egg into the soup. Cover and continue to simmer until the eggs are set, about 5 minutes.

4. At the bottom of each bowl put a couple of pieces of baguette and a generous sprinkle of cheese. Serve the soup, with an egg in each bowl. Sprinkle the egg with a little more cheese if you are so inclined.