It'll be salad season soon and that means salad dressing. For someone whose favorite food is salad, I have a conflicted relationship with salad dressing. I had a basic formula that usually turned out pretty decently, but I still hated it when the last drops were used up and I had to make some more: chopping the shallots was fiddly, the garlic press would sometimes just smoosh the garlic so I'd have to pick that out and rechop it, and all of it had to be crammed down a funnel and usually poked with a chopstick to get it into the glass bottle in which I made my salad dressing. And sometimes (almost always) I was too lazy to measure the stuff and would end up with a dressing that was too acidy or too blah and the thought of getting out the damn funnel again and adding to it was so unappealing that I wouldn't do it and we'd just suffer through the inferior dressing until it was gone.

But no more. For Christmas, I got a new toy: 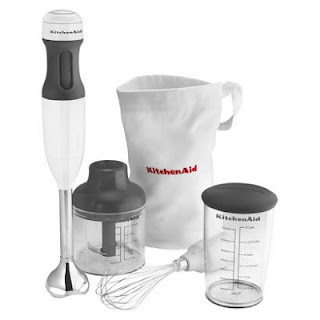 (except mine is silver instead of white.)

It's great for the expected stuff: blending soups in the pot instead of slopping stuff back and forth to the blender; the little chopper does a great job on onions which is particularly good when I either have a lot of onions to chop, or am cooking with a kid (eliminates the complaints about slipperiness and eye stinging).

The whisk thingy isn't so useful for me. I used it once to whip some cream when the mixer bowl was sitting in the sink waiting to be cleaned and it was ok, but I'd always choose the stand mixer if both were available.

But the real revelation has come in the making of salad dressing. This thing does an amazing job making emulsified dressing with almost no effort. And I can taste as I go so I don't make a jar-full-of-blah. And no chopping. And I can make it a slightly creamy vinaigrette with some yogurt with no clumps or lumps which never worked with the shaken kind. And it never separates (well, maybe if you left it for a month it might, but it never sticks around that long around here.)

There's a measuring beaker that I can make it in, with a rubber cap, but I usually prefer a wide-mouth mason canning jar because the lid stays on nice and tight and there are people here who sometimes shove stuff into the fridge without looking where they are shoving. Anyway, back to the dressing.

I toss in a whole garlic clove and about three wee peeled shallots (I grow these and they don't come out honkin' huge like some that you get at the market, and that's fine with me because I like them small) and some salt and pepper. 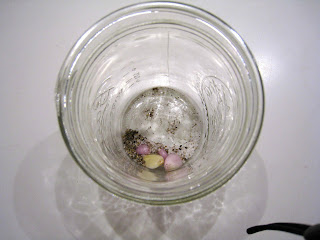 Then I add dijon mustard, plain yogurt and a little something sweet--honey or maple syrup--just enough to round out the flavors. 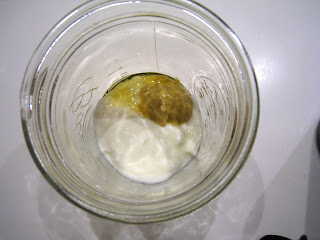 Then I glug in some sherry vinegar and maybe a little lemon juice and give it the first buzz with the hand blender. 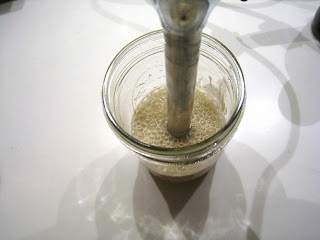 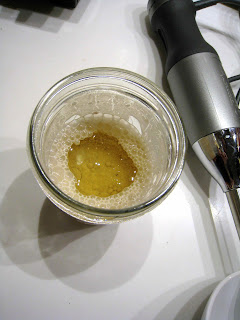 Then it's the second buzz buzz time and in seconds I have perfectly blended and emulsified salad dressing (that also doesn't separate so no shaking necessary). 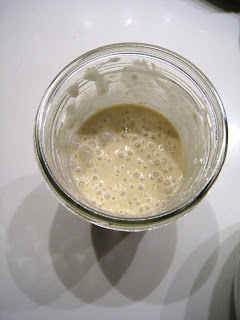 I don't yet have real "recipe" proportions; I'll try and remember to measure the next time I make it. And I'm very excited to try some new variations--I have plenty of mason jars! I'm thinking a soy mustard vinaigrette is in order, maybe one with miso and rice vinegar and ginger and orange juice, maybe another with avocado subbing for the yogurt and some fresh basil.

Stand by for updates!
Posted by Kate at 7:25 PM