One of the more fun things that I've had the chance to do since last September is dabble in the Detroit restaurant scene.  That's when my son started playing jazz piano with the Detroit Symphony Orchestra's Civic Youth Ensembles (which, on a musical and parenting note, has been a fantastic experience. Auditions for 2014-15 are coming up so if you have a musical kid and are willing to do the schlep, I'd highly recommend checking them out.)  His ensemble rehearses every Wednesday from 7-9:30 and by a fortuitous aligning of our family's schedule with my mom's, my daughter has spent those evenings having concentrated one-on-one granny time while Brian and I take Ian to Detroit. We drop him off and then have about 2 hours to go out to eat before heading back to listen to the end of the rehearsal and take him home. There have been a few times that we both couldn't go and since the new year they've had to cancel 3 out of 5 rehearsals due to extreme weather (and probably should have canceled one of the 2 they held since it took us 2 hours to make the normally 45 minute trip).

One of the first things I did was make a Google map of food establishments that I'd like to try. Since we have time limitations*, we're mostly sticking with midtown and downtown Detroit (though I hope to get to Hamtramck soon to try Rock City Eatery). It also means we can't go to places where there are long waits for tables or super slow service. I really want to try La Feria Tapas, which is right around the corner from DSO, but it's tiny and there's always been a wait. There are also the financial limits--we don't have the budget to try Detroit's higher end dining every week so most of the places we're going to are pretty affordable.

Here's a rundown of the places we've gone. The few photos I have are crappy iPod pics because I haven't remembered to bring a decent camera with me.

Green Dot Stables: A fun tapas-like place but with sliders. Order a whole bunch and share. I liked the Korean (beef, peanutbutter and kimchi), tempeh and buffalo chicken sliders the most. Some of the others were less successful--the quinoa was dry and the "mystery meat" of the day was a tasteless deep fried wee scrap of wild boar. And then there were basic choices like the coney dog and cuban (fine, just not very interesting). The desert fluffer nutter slider was fun and sticky. The cocktails are cheap ($3) and potent so make sure you have a designated driver who can resist their call. 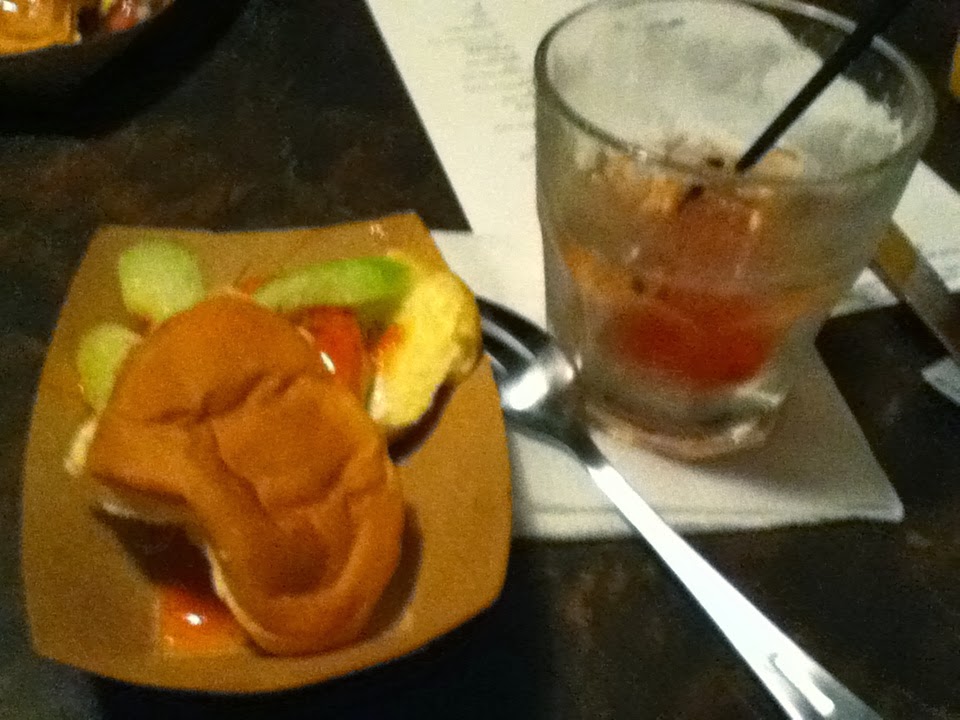 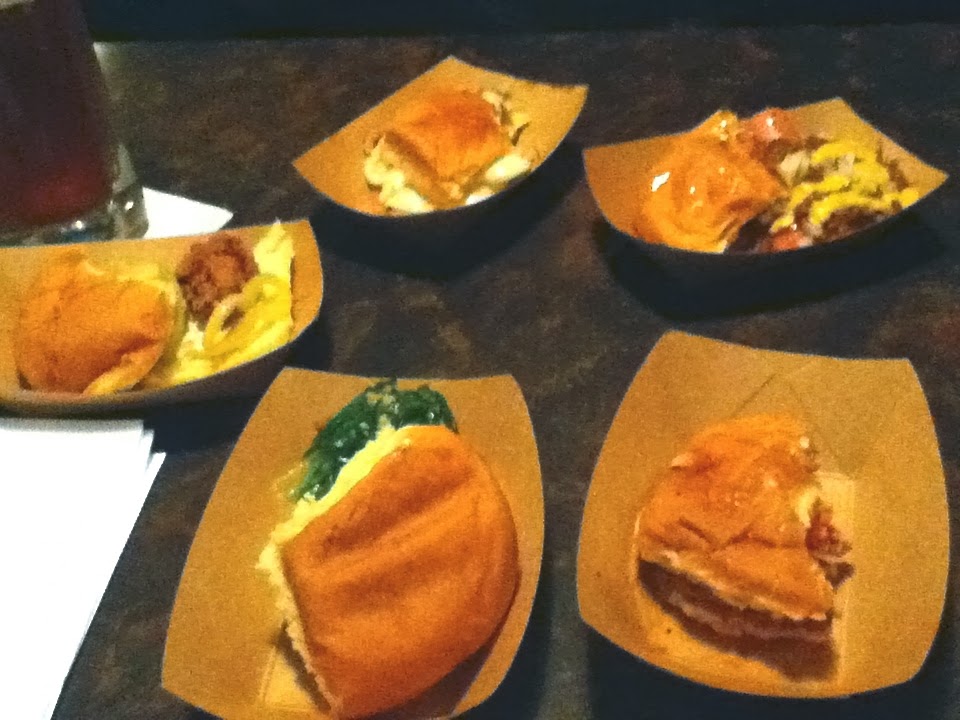 Motor City Brewing Works:  good beer and decent enough pizza. I wish they'd improve their crust (too squishy and sweet) but otherwise an ok accompaniment for the beer. 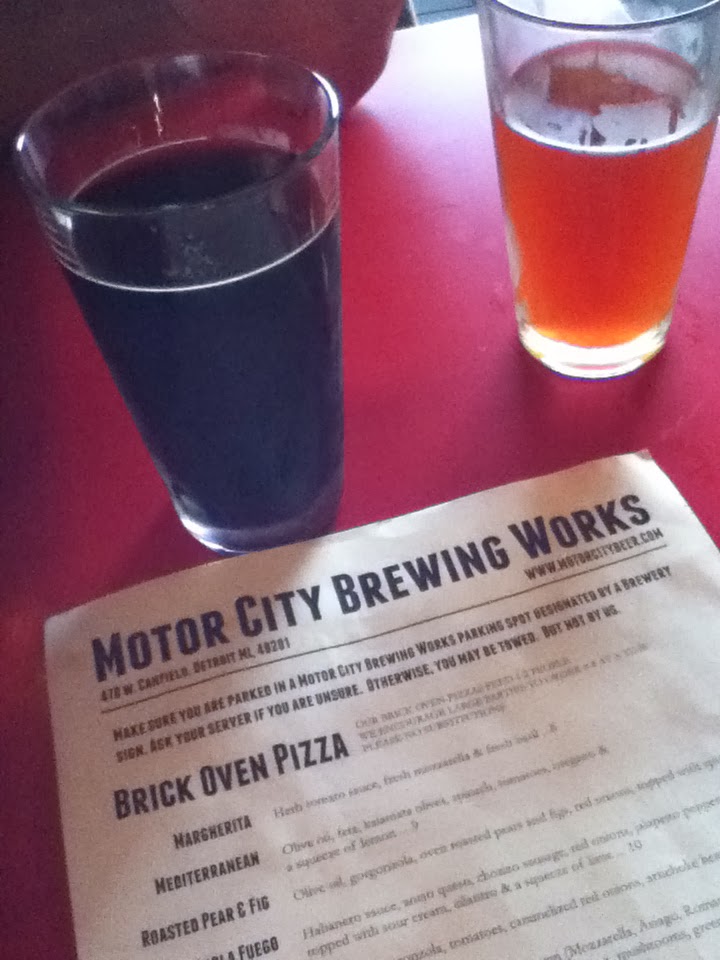 Slows BBQ: delicious bbq--we had pulled pork, brisket and ribs--and huge portions. We got lucky with two seats at the bar but be prepared to wait if you want a table or visit the Slows to Go (which, despite the name, actually has some seating and in summer has a nice long outside picnic table) on Cass Ave.

Grand Trunk Pub: Decent enough bar food (good burger and corned beef) but we went here mostly for the atmosphere--the pub is located in what was the Grand Trunk Railway's ticket station so you can sip your beer under a gorgeous ribbed barrel vault ceiling. 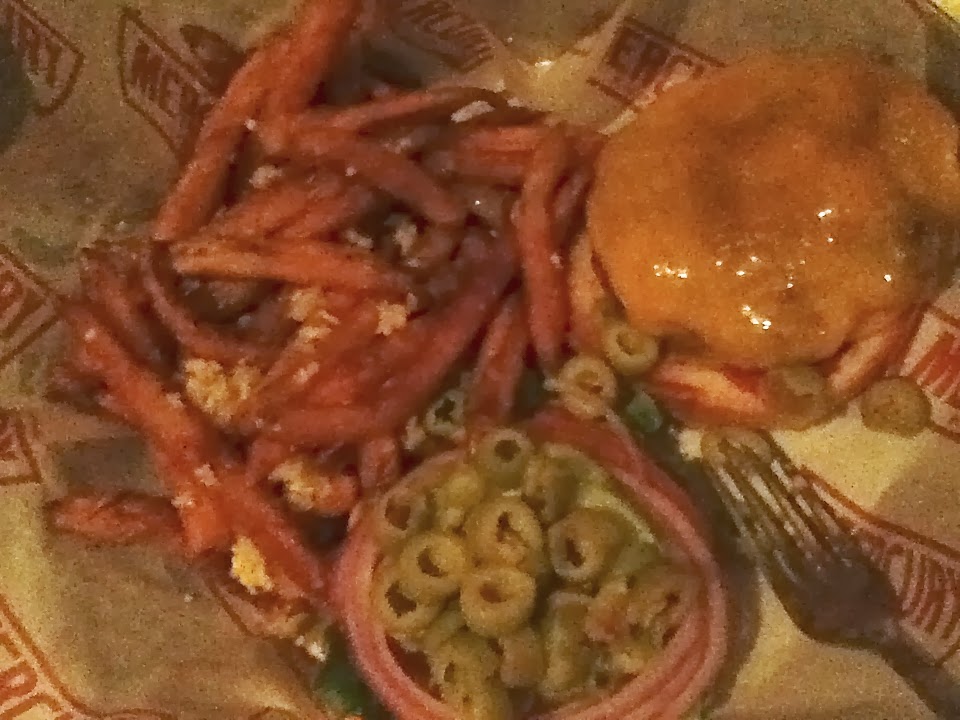 I had the Flint Burger (green olives and cheddar) and garlic fries. The fries were cooked in lard and then tossed with an addictive garlic, rosemary, black pepper, salt comnination. Brian had the fried bologna sandwich which came with excellent homemade pickles. He chose poutine for his fries which were ok, but not as good as you can get across the river in Canada.


Cass Cafe: Very casual, friendly place with good affordable food and decent beer selection. I had a good salad that they made a little extra effort to make interesting  (hardboiled eggs coated in smoked paprika and deep fried artichoke hearts). It might not be a place I'd go out of my way to visit, but I liked the place and I'd be here all the time if I was a Wayne State Student.

Traffic Jam and Snug: fun atmosphere and decent porter, but I thought the food was disappointing. They make their own cheese and bread here (along with the beer), but I thought the bread was dry and tasteless and the cheese wasn't much more interesting than a slice of Kraft cheddar.

Dangerously Delicious Pies (inside the 3rd St Bar): outrageously good savory pie (especially the Smog--steak, mushroom, onion, gruyere), $6 a slice with a side salad, but I won't go back unless I want to get it for carry-out or until Spring/Summer when the outside seating is open. The 3rd St Bar is dark, cold, plays crappy music really loud and didn't have functioning draft taps. I wish Dangerously Delicious was housed in a more worthy bar.

Here are the places that I'd like to try between now and when Ian's rehearsals end for the season in early May:

Supino Pizzaria
Ally Tacos (a counter inside Marcus Market)
Vincente's Cuban Cuisine
Bucharest Grill (two words: chicken shawarma. You can take it to the Park Bar next door where they have a good selection of Michigan craft beer)
Rock City Eatery
Craft Work
Any other places that should be on my list and meet our limiting distance and price criteria?


_____
*There are additional timing complications because some of Detroit's restaurants and bakeries aren't open in the evenings (I'm looking at you Le Petit Zinc, Mudgie's and Avalon Bakery) so despite being within our geographical and price ranges we can't make them work.

I can heartily recommend Byblos, right down the street from Wayne Law at 87 West Palmer. Their Turkish coffee is the only reason I passed my late-night tax law class. They serve a sandwich that sounds like an odd combination, but is delicious beyond belief: mjedra and fresh spinach, with melted swiss cheese, wrapped in a pita. I think there are some pickles in there too. It's just divine!

Thank you Deb! We've been looking for good ethnic food restaurants, most of which seem to be located too far out (strip malls in the suburbs) so this is a very welcome suggestion to add to our google map!

We love Supino Pizzeria in Eastern Market - they have a beautiful thin, crisp crust - and my love, who works downtown Detroit, could give you better ethnic pointers.

Thank you alibrarymama for the Supiono's shout out! I was kind of on the fence about going since we eat so much pizza on a regular basis, but I am so glad we followed your advice--it is the best pizza I've ever had (even in Italy!) After the first time we went my husband said "This is so good it makes me sad because it's all downhill from here" but then we went back (w/the kids) and he said "Nope! It isn't downhill! This is just as good as the first time!"