Yesterday I was introduced to a new term: thundersnow.

It's when your snow storm is accompanied by thunder. Because snow falling at 2 inches an hour isn't bad enough. If you want to see and hear what it's like, I direct you to this youtube video I found.

I've handled the 6+ feet of snow we've had and shoveling new snowfall onto piles that are taller than I am. I've only griped a little when the numerous polar vortexes swept through and temperatures dropped into the -20 degree zone and were even colder with the windchill. I've deal with chipping through 1.5 inches of rock hard ice off the sidewalk with a coal shovel (great upper body workout!).

But thundersnow made me want to go hide in the closet, curled in a ball, and not come out until Spring.

So something had to be done.

And that something had to involve butter, eggs and chocolate. Definitely chocolate. 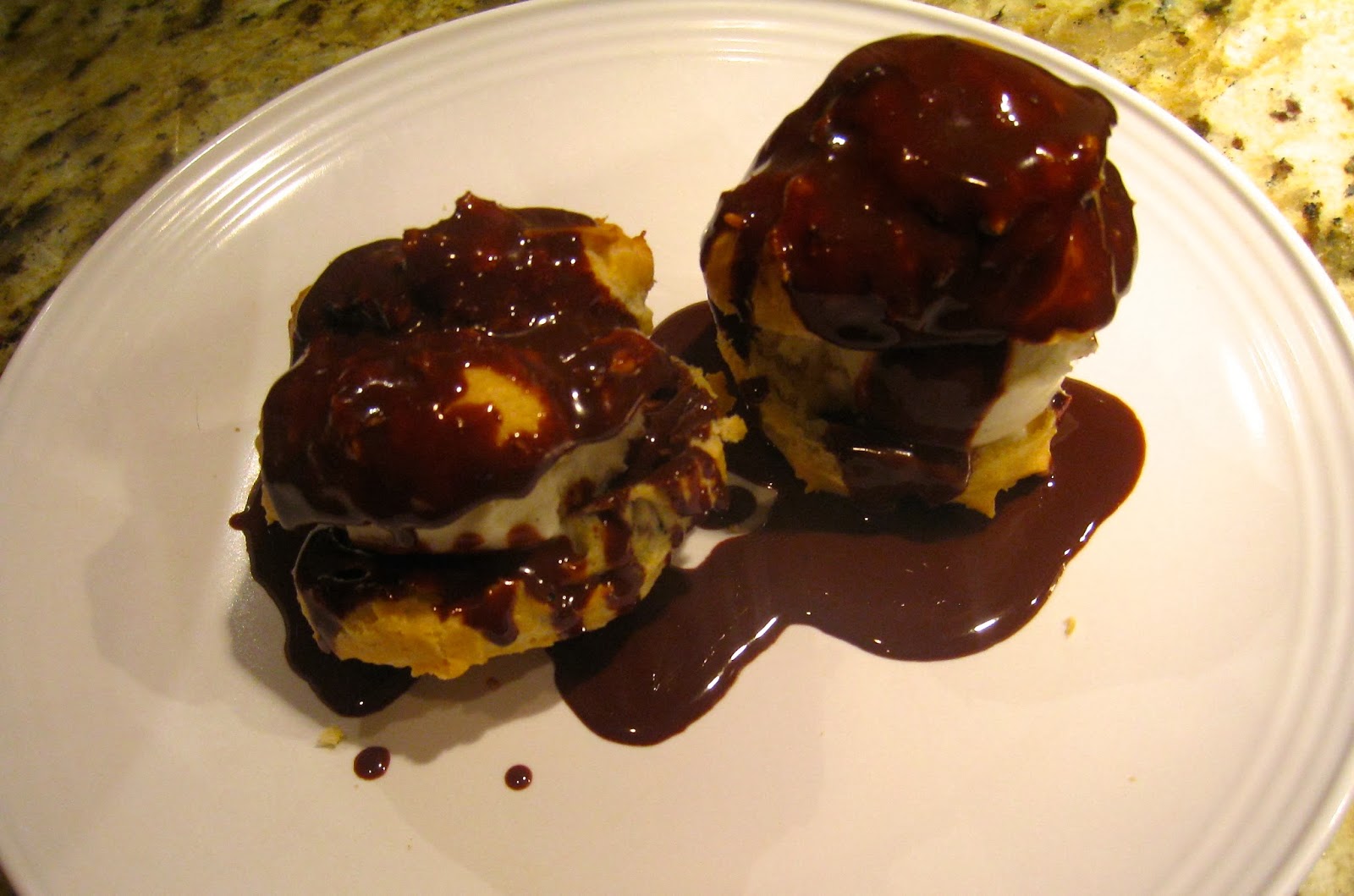 Ok, yeah, I'll uncurl myself from the fetal position to eat profiteroles.

The fact is that choux pastry is ridiculously easy to make and I was in no mental state to take on anything tricky or labor intensive. You chuck a stick of butter and a cup of water into a sauce pan, bring it to a boil, then turn the heat to low, dump in a cup of flour and stir with a wooden spoon until you have a globby ball that pulls away from the side of the pan. Plop the ball in the stand mixer and beat in 4 eggs, one at a time, until you have a smooth, pasty batter.

Then you can either use two spoons to urge little 1" blobs of the sticky dough onto parchment-lined cookie sheets, or glop the stuff into a ziplock bag, snip off a corner and pipe tubes for eclairs.  30 minutes in a 400 degree oven and you get cute little balls (or sticks) of puffiness to play with. 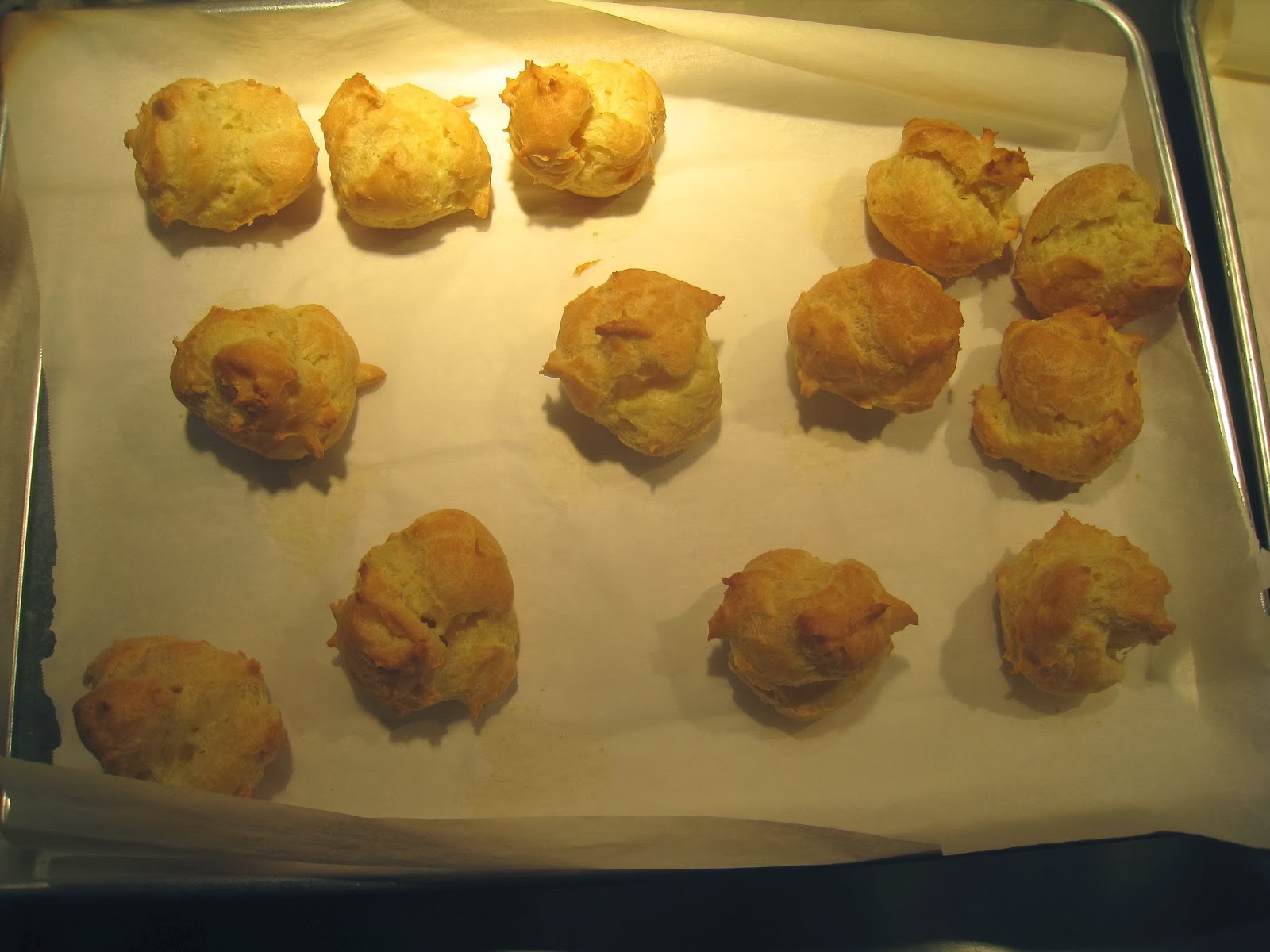 My favorite way to fill these is with whipped cream, but I didn't have any in the house and the two other people I was making these for still don't like whipped cream (my kids now eat spinach, but still consider whipped cream to be an unpleasant substance...go figure). There was vanilla ice cream in the freezer and I made a mediocre batch of pastry cream for the eclair tubes. It was more like vanilla pudding, enriched with egg, and not as good as the pastry cream I learned to make in my pastry class years ago (gotta find that recipe which is buried somewhere), but it was perfectly sufficient and served its therapeutic purpose last night, particularly when drowned in chocolate sauce (again, not amazing chocolate sauce--just some bittersweet chocolate melted into hot half and half). For my second round, I peeled a ripe bartlett pear, sliced it thin, put the profiteroles on top and doused the whole thing in chocolate sauce. It was very messy and very delicious and possibly the only reason that I am able to be coherent today.

You'd think that thundersnow would be a good way for winter to get its last punch in, but no. Today we have high winds (50 mph!) and flooding. Yesterday in a low lying part of a street I saw a backhoe digging out a storm drain from the concrete-hard mountains of snow that the snow plows have tossed up--not a little bobcat, but the big honking kind that you see on construction sites.  That was a first in my memory. And I assume the city will be sending that particular piece of equipment out all over town to try and give some of the melting snow a place to go. Particularly since there is another nasty blast of cold coming and if they don't all the streets will be sheet ice. If that happens, I don't know what I'll do--will a second round of profiteroles save my mental state? Or will I have to take it up a notch and if so what would that even look like? Suggestions welcome, particularly if you are local and want to come share.

I think it's time to do some theme desserts. Sheet cakes, with construction equipment on top, and icy blue icing, maybe? Wishful thinking desserts: something with lava exploding out of it - mountains of chocolate goo. Drinks with little umbrellas in them to go with.