Closing out the CSA season with three weeks packed into one post. I got sick during week 18 so went minimal; then I got busy and didn't feel inspired to do much beyond basic "use it before it rots cooking."  I end the post with a few reflections on this Homer CSA season. 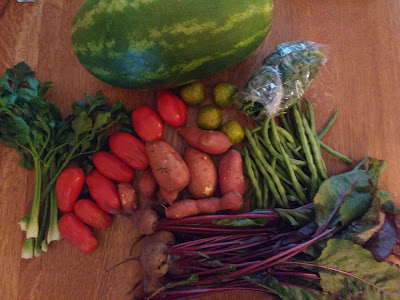 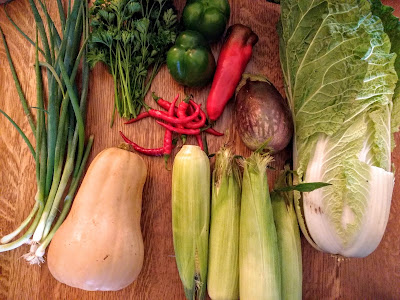 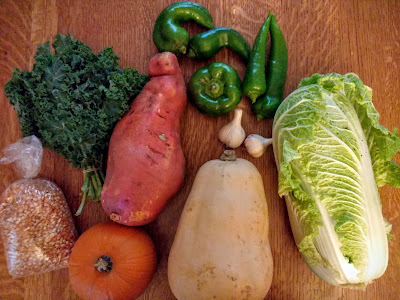 What I did/plan to do with it all:


And now a reflection on the season:
I haven't decided whether I'm going to do the Homer CSA again next year. The produce was generally good and unsurprising; what I missed in the creative offerings from my years with Tantre (sweet potato leaves, shishito peppers, Japanese turnips, lots of herbs) I appreciated in the fact that I didn't have to work too hard to figure out what to do with the weekly share.  Most of the vegetables were good and fresh and tasted great with simple preparation if I was too busy to do anything fussy. There were a few disappointments: the corn was pretty tasteless (quickly learned that corn on the cob was not the way to go with it and cut it off and mixed it in with other stuff), the celery was bitter beyond use (chucked it in the compost), one cantaloupe was rotten and there was not much basil and there were almost no potatoes (only one week in the spring). I hadn't realized how much I was looking forward to fingerlings and the like until they never showed up. The communication from the farm was sporadic and not terribly helpful when compared to Tantre emails (for example, if a pest got the potato crop and that's why there weren't any, it would have been nice to know that.) The few recipes they suggested were not my kind of cooking (think hearty Amish) but that didn't really matter to me since I have pretty strong opinions and ideas about recipes to go on. The pick up at Arbor Farms on Saturday mornings was really convenient so thats a big plus. I am pretty tempted by the White Lotus Farm CSA for next year; I've been looking at their Instagram photos where they occasionally post photos their weekly CSA share and their farm is not that much further from my house than Arbor Farms, though the pick up time is later in the day and thus more of an imposition on my schedule. As an early riser, the 7:30-8:30 pick up for Homer CSA was ideal because I could get it and then get on with my day. But with White Lotus, I might be able to lure the girl child out to the farm with me (goats to visit! goat cheese, croissants and other treats to buy!) so it might help develop positive associations with produce for one of my kids. I'm going to keep contemplating my options for next year. If you have another CSA to recommend with easy west-side of Ann Arbor pick up options, please let me know!

Kate, a belated thanks for the CSA chronicles.

We have an easy recipe for ginger squash (steamed or baked winter squash pulp, grated ginger, some fresh lemon juice, maybe a little olive oil if it's too dry). That's what I thought of when I saw that nice-looking butternut.