Last night I made the oven-fried chicken I mentioned yesterday and greens, cheese grits for me and for the gluten eaters, I made these biscuits: 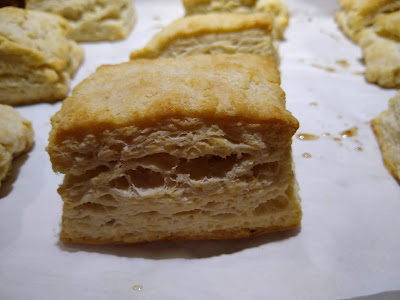 They are Kenji Lopez-Alt's Buttermilk Biscuits from Serious Eats and are super easy and hard to screw up. The only changes I made to his recipe was to use soured milk (1/2 C milk and 2 t vinegar mixed together and left to sit for 10 minutes) for the buttermilk and I cut them in squares rather than using a biscuit cutter to make circles because then there's no waste and no need to re-roll scraps of dough. The recipe made nine sizable square biscuits and since there are only three left, I think that means that the three humans I made them for approved of the recipe.

This morning I decided to continue the carb celebration and made my new favorite thing, buckwheat pancakes. 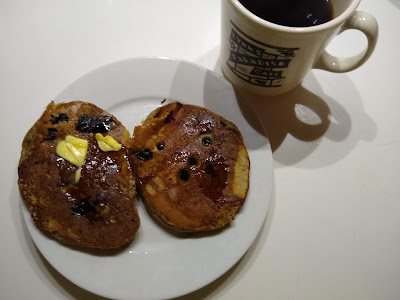 These babies (recipe below) are gluten-free using half buckwheat flour and half Namaste gluten free flour blend. I chucked in a few shriveled blueberries I found in the fridge that no one is likely to eat fresh then topped them with a little Irish butter and a drizzle of maple syrup. 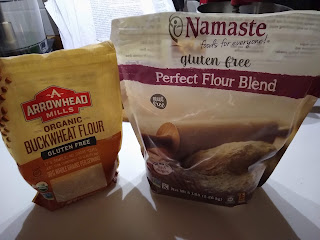 Which leads me to a little discussion about GF flours; while most grocery stores are out of wheat flour, there are likely still GF flours on the shelf. Yesterday I went to Arbor Farms to get groceries for me and for my parents. I hadn't been to a store in a week and I was curious and nervous about what I'd find out there. The place was not ravaged and didn't look like a scene from the apocalypse.* They were, however, out of wheat flour. But there were plenty of gluten-free flours on the shelf and since I have time on my hands to experiment and bake right now, I stocked up on some. If you want to bake and don't have any wheat flour and can't buy any until the supply chain balances out again, give some of these a try. (Avoid King Arthur's gluten free flour mix, though. That stuff is gritty!)

Start by souring your milk: stir the vinegar into the milk and set aside for 10 minutes to get it to sour (if you have buttermilk in the house, use that instead of the milk and vinegar).
In a medium bowl, mix together all the dry ingredients.
Combine the soured milk, egg and vanilla and use a whisk or fork to get the egg distributed well. Dump the wet stuff into the dry stuff and mix until there aren't any more dry bits. Then walk away for 10 minutes (that'll give the acid from the sour milk and the leavening ingredients time to react and thicken your batter. If you make the pancakes right after combining the wet and dry ingredients they'll be much thinner. Ask me how I know...)
Heat up your pan, add a little canola oil and then drop 1/4 C sized blobs in and cook as usual (look for bubbles to form on the surface, then flip.)
Serve with butter and whatever you like on your pancakes: maple syrup that has been warmed up with some frozen blueberries is lovely, but I also like these with just a slice of sharp cheddar cheese on top.

I got 8 hearty pancakes out of this recipe. If you don't have an audience to eat them all at once, then refrigerate the leftovers and they can be reheated in a toaster oven or microwave in the coming days. Waking up to pre-made pancakes is a really nice way to start the day.


*A big plug for shopping at Arbor Farms (probably also holds true for other small markets, but I haven't visited any): the cashier changed gloves between each order, the place was pretty empty so no standing in line with tons of other people and they had a pretty decent supply of foods that I hear are running low elsewhere. I saw sliced bread from Avalon bakery, plenty of olive oil on the shelves and it looked like the De Cecco brand dried pasta had just been restocked because the shelves were full. There were a few things that you could tell had been impacted: the canned soup section was decimated and there wasn't the normal selection in the chicken section (I usually make the oven-fried chicken with all thighs but they were out of those so we did it with a cut up whole chicken and it still worked great.) There was plenty of good stuff in stock if you are able to be flexible. Best of all I didn't feel like a massive ball of stress from the experience of shopping there.

(And I love Arbor Farms!)