In this time of forced confinement, I'm trying to use what I have and that leads to multi-obsession/genre STASHBUSTING. I'm covering yarn, food and books in this post so if one of my obsessions doesn't interest you, scroll on down to the one that does.

Yarn
I started Ankestrick's Simple Something sweater because it looked like a great stashbuster. Then I realized I don't actually have a huge stash of yarn because I work in a yarn store so have pretty amazing access to whatever yarn I want whenever I want it (living the dream, people!) In my defense, I am using two skeins of legit stashed yarn and one of them was the inspiration for the project: a cream and pink and beige skein of sock yarn that my lovely employer, Spun, commissioned from a dyer based on our pets. 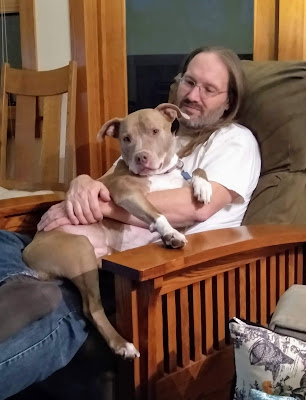 Here's a photo of the inspiration: Molly, the pink-nosed pitbull, 65 lb lap-dog and major snuggle bug

My Molly skein has been sitting around, waiting for me to do something with it. In my many years of knitting, I've made about five pairs of socks and while I get the appeal--portable, finite, warm feet--I never caught the bug. I really like knitting sweaters (and yes, I now give away sweaters. I don't need any more sweaters. But I still want to knit them.)  The construction of this sweater is very simple: doubled sock yarn makes for a heavy worsted weight sweater with top down/raglan construction. The fun is in deciding which colors to use and when to change one or both of the strands; someone on Ravelry called it "painting with yarn" and that seems an apt description. There are some bold, wild examples of this sweater on Ravelry that I admire, but I decided to stick with a quiet color palette, mostly just riffing off the colors of the original Molly skein and another gray stashed sock yarn (label long gone; I think I bought it in Germany where sock yarn is sold in grocery stores) while bringing in a little purple and light green. There are also lots of little scraps of left-over fingering weight yarn from past projects that I'm using as accents and it's very satisfying to see a stripe of green and remember a shawl I made last year. 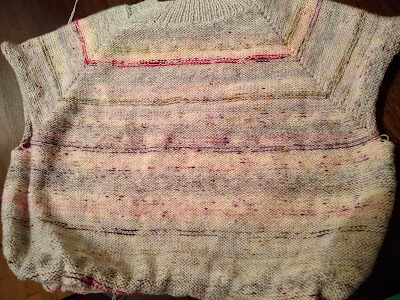 I ended up purchasing four skeins of yarn to add to the Molly and the mystery gray stash skein: I bought them at Spun (which is offering free local delivery and free shipping while the store is closed). Two of them are from local dyer Fiberstory and they are her Fave sock yarn in the colors Crocus (cream with purple speckles) and Cake (a very subtle cream/pink/yellow). And there are two grayish based yarns, one is Fig & Posy Fiber Co.'s Simple Sock in Abalone and the other is Neighborhood Fiber Co.'s Studio Sock in Earnest Shaw.


Food
The freezer clean-out continues and is a little terrifying. I found a packet of totally freezer burned sausages and now the dog has a couple of days of really good Kong fillings. She's pretty happy about this process.

I also found some pre-formed turkey burgers that Brian bought during one semester of particularly hectic family schedules during which none of our dinner times lined up and individuals were regularly scrounging for something that resembled real-food. He thought these fit the bill. The fact that they were ignored by everyone and shoved to the back corner of the freezer means that he was wrong.

Last night I took out four of the individual patties (lightly freezer burned at the edges), defrosted them, crumbled them up and made Curried Ground Turkey with Potatoes. I make real Indian food pretty often and I warn you, this dish is not that. But it is kinda nice and comforting on a cold rainy day. I made brown rice and raita to go with it. Brian and I ate it happily and the other two human residents at this fine establishment tolerated it: one picked out the peas and the tomatoes, the other picked out the potatoes. They are weird and a pain-in-the-ass but I love them.

I also found a frozen pack of Trader Joe's puff pastry that was bought for some appetizer idea that never got made (I think it was supposed to be rolled up with brie and cranberries and then the event I was going to bring it to was rescheduled and I never made it.) So I tried making palmiers with it to give the gluten-eaters an afternoon treat and it was a total disaster. I've never used TJ's puff pastry before but wow, that stuff sucks. I've made my own puff pastry (a labor intensive project, but not a bad one if you have time and want to try your hand at laminated dough) and this stuff does not even closely approximate it: puff pastry that doesn't puff is just tough, greasy dough. The younger child ate two of the resulting palmiers (because grease and sugar count as major food groups for this age bracket) and then I threw the rest away. Disappointing, but at least I'm not wasting freezer space on an inferior product.

I started rummaging around in the pantry and I found a whole container of grits hiding behind the sugar containers which were probably purchased after some trip down south and then promptly forgotten. So I made myself cheese grits topped with a good splash of hot sauce: 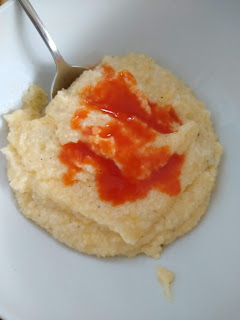 Ugly, but tasty! And gluten free!

I'll make these again as a side-dish to go along with oven-fried chicken (here's a great recipe) and greens.

Books
I'm really trying to read The Mirror and the Light slowly but oh god it's so good and hard not to gobble it down and I'm going to be really sad when it ends. So I'm queuing up Ocean Voung's On Earth We're Briefly Gorgeous (Christmas gift!) for when I finish spending time with the Tudors (they are such a weaselly lot but oh how I love them). I tend to feel panicky if I don't have at least one book lined up to look forward to and no-one needs a panicky Kate right now, or really, let's be honest, ever.

Since I have time, I also decided to make a little room on my bookshelves for new stuff so in the coming days I will post pictures of books I own that I don't plan to re-read and which will be looking for a new home. I will attempt to get my kids to engage in a similar project which would liberate space on their shelves and provide a broader range of genres/topics/ages. If you are local and want one of them, I can drop one (or more!) off at your house. I love our local bookstores Literati, Bookbound and Nicola's and will try to support them to the best of my budget's ability during this period but I know that isn't an option for everyone so if one of my books would make you happy, please ask for it (while the library is closed another resource is the free ebooks and audiobooks that can be checked out from Overdrive with your library card.) And now I'm actually looking forward to what I would normally describe as a chore: it'll be like visiting with old friends who I haven't seen in a long time. Since I can't sit down with real friends at the moment, my book friends will serve as a nice substitute.

I did not know you worked at a yarn store! Which one?

I was (and will be once they open again post-virus) at the lovely Spun in Kerrytown, usually just Wednesdays and Fridays with the occasional Sunday or Monday thrown in.

I can't wait to see the finished sweater. It already looks gorgeous.

Also, ordered the Mantel book from Literati. It hasn't come yet but so excited about it!

I just started The Mirror and the Light, and am also working my way through the back of the freezer. Thanks for reviving the blog!