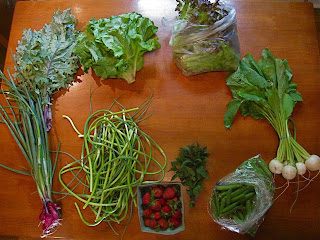 It's kind of a small share this week--good thing I only have to feed two people since my critters still only tentatively nibble the occasional piece of lettuce or a few peas. I was hoping for another load of spinach because I have a hankering to make Indian food and saag is one of my favorite dishes. Ah well, it'll have to wait until another week!

Larb Mu (Thai pork salad)
Traditionally this is served with whole lettuce leaves that you use to wrap up a portion of the seasoned meat. My lazy version has you make a big salad for each person and top it with the meat. It makes it a fast week-night meal instead of something I would only take the time to do occasionally.

In a small skillet, toast the uncooked rice, stirring so it doesn't burn. It should turn golden brown and have a nutty smell. Grind in a mortar and pestle or a spice or coffee grinder. (If this step sounds like too much of a pain, I've made this salad without the toasted rice powder and thought it was still pretty terrific though I'm sure some people think that it is essential to the dish.)

In a big bowl mix together the fish sauce, sriracha, sugar, lime juice, shallot, and scallions and set aside.

In a big skillet or wok heat the peanut oil and cook the pork (or turkey) until it isn't pink. Crumble it while cooking so it doesn't clump up. Dump the cooked meat into the bowl with the sauce and toss it around a little. Sprinkle in the rice powder.

On plates make a pile of lettuce, top with the chopped/shredded vegetables of your choice. Then place a generous portion of the meat mixture on top. Sprinkle with plenty of the herbs and serve.
Posted by Kate at 2:51 PM

I'm plowing along with my single-person eating, but the veggies are starting to pile up. Luckily I have a pal at work on whom I can foist some things.

I think all the garlic scapes are destined for pesto.

Oh my God this looks so good and i`m sure that it is delicious too. I think it is not a very difficult recipe so i will give it a try, thanks a lot for sharing.