In case you are the slightest bit stuffy... 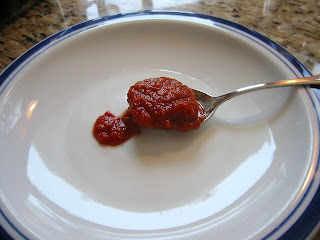 ...this stuff will blast your sinuses open.

I was at the gym listening to my favorite food podcast, Good Food, while sweating away on the orbital machine when the woman Evan was interviewing (who apparently is some famous host of Bravo's Top Chef but as we only have what the cable company refers to as "lifeline cable" I don't have much perspective on her) gave the recipe for what sounded like a terrific hot sauce--chipotles with dates and honey to balance out the heat.

I made some this afternoon and after tasting it, realized that maybe my sinuses don't need to be opened quite that far--it was a bit beyond my comfort level for hot sauce. So I chucked another couple of tomatoes and some more dates in the blender jar, added some lime juice for a little more sour contrast, gave it a whir and now have a hot sauce that conforms to my level of desired pain.

I'm going to serve it tonight alongside pork tenderloin. The pork will be cooked very simply in the hopes that the two small timid eaters will allow it onto their plates, but I'll be able to kick up the flavor factor of my dinner with this sauce.

10 dates, pitted, cut into chunks
4 plum tomatoes, seeded. If they are very juicy, squeeze out some juice so your sauce isn't too runny.
7.5 oz can of chipotle peppers in adobo sauce
1 clove garlic
1/3 cup honey
juice of one lime
1 tsp coarse sea salt

In a blender or processor, combine all the ingredients and blend until they make a thick paste. Pour into a deep saucepan, and cook over medium-low heat for about 5 to 6 minutes. Cool and then store in an airtight glass jar.
Posted by Kate at 12:22 PM

This recipe sounds great. I'm definitely going to have to try it, especially given the cold weather we're having right now. I'm glad I found your blog. I'm also a writer, a reader, a cook and a crafter.
Sandra Hamlett
http://sandrahamlett.blogspot.com

We made this last night Kate, and it was awesome! Let me repeat...this recipe was fantabulous. We served it over rice with roasted bell peppers and pork. With a side of tomatoes and avocadoes (to balance the heat) and it was rockin. Thanks for posting!!!

Given the title of this book, I've been eager to check it out and try out some of the recipes :) Thanks for sharing this one.