Brazil, but for kids 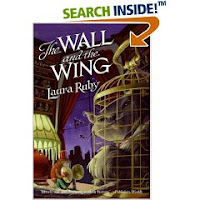 I recently finished reading a YA novel that is like the Terry Gilliam movie Brazil, but for kids. The Wall and the Wing is set in an alternate reality New York City where most people can fly, where toy monkeys can keep your secrets (and wipe your memory clean) and where cats are rare creatures who pick their owners.

In this surreal landscape are two orphans, Gurl and Bug, and they search for their identities and for a life a little less miserable than the one they inhabit at the orphanage, the wonderfully named Hope House for the Homeless and Helpless. The matron of the orphanage is Mrs. Terwiliger who reminds me of the Katherine Helmond character in Brazil--too much plastic surgery and warped ideas of what is important in life. Of course the plot isn't about a bureaucracy gone mad but about two lost children, one of whom discovers that she can turn invisible and the other who can fly really high, but only when holding onto a cat called Noodle. There are other wonderful characters in the book--a professor with grass growing out of his head who has a seemly endless supply of kittens in the pockets of his house dress, a man who can unzip his face, and a gangster who was a diaper model when he was a baby. Possibly my favorite creatures in the novel are the giant sewer rat men with filed pointy teeth who love kitties. They are creepy as hell but, like Gurl, they just want to cuddle a cat and feel it purr.

The plot moves along at a fast clip and after a whirlwind of experiences and adventures, the two orphans are no longer lost and are adjusting to their new identities. I was willing to say goodbye to them for now because this wonderfully imagined world and the eccentric characters in it will get more page-time--there is a sequel titled The Chaos King to look forward to.
Posted by Kate at 2:42 PM