Quarantine-brain and the fact that I stopped wearing a watch about 3 weeks ago means I really don't remember how long ago I began "building" my gluten free sourdough starter, but earlier this week I was able to give it a try and made one batch (two loaves) of gluten free sourdough bread from Aran Goyoaga's lovely cookbook, Canelle et Vanille. 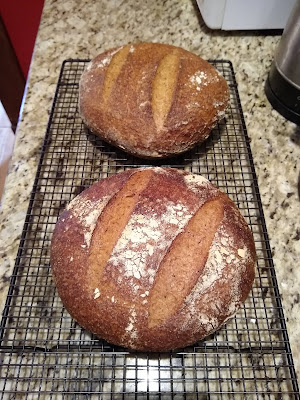 The recipe uses the technique of Jim Lahey's famous no-knead bread (baking in a pre-heated cast iron dutch oven) with a gf starter Goyoaga teaches you how to build day by day, and dough ingredients that she has tweaked to get gf bread that does a decent job of replicating the flavor and texture of regular bread.

I don't think my starter is particularly robust which may be due to the fact that it is early spring here and my house is cold. I finally figured out that I should be leaving it in the oven with the light on after feeding it, and that caused the bubbling to become a little more energetic. But, like me these days, my starter is maybe a little sluggish, a little sleepy, a little what-the-fuck-do-you-want-from-me surly. That's ok; it still worked out and got me a good-enough rise and produced a loaf with a good-enough crumb (we are all about good-enough, these days). The crust of this bread is truly spectacular: crackling and deeply flavorful. 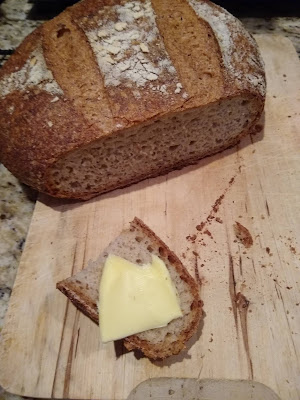 Why yes, that is the correct ratio of Irish butter to bread, thank you for asking.

There were a number of ingredients that I had to track down to make this. Thankfully, the general panic to purchase regular wheat flour that has emptied supermarket shelves has not spread to the GF baking section so (for locals, at Arbor Farms) I was able to get my hands on the sorghum flour, psyllium husk and potato starch that I didn't have in the house. I couldn't find gf oat flour so I ended up dumping some gf oats in the food processor and blitzing them to a chunky powder. The resulting oat flour probably wasn't as fine as the commercial stuff or a flour made in a high powered Vitamix, but I think it worked well enough and the oat flavor is really nice. I find stuff made with just brown or white rice flour to be pretty flavorless so the oats (and probably the sorghum?) give the resulting bread a depth and "toasty-ness" that is lacking in a lot of gf recipes.

Next time I make this I'll do the following things differently:
1. I'll only make a half a batch. I only own one cast iron dutch oven (do people really have two of these heavy behemoths in their kitchens?) and the second loaf that I made in a covered ceramic pot wasn't quite as nice. Maybe I'll go back to two at a time in the summer when I'll want to limit how often I turn on the oven for a long bake. But for now, I'd rather have one really good loaf at a time.

2. I might invest in a banneton proofing basket. I used a metal colander lined with a rice-flour dusted tea towel and it worked ok, but the bottom of the colander is kind of flat and I think contributed to the top of my bread not doming quite as much.

3. I'll probably try and bake it for another 10-15 minutes, to make sure that the moisture in the interior has a little more time to dry out. Lots of gf bread recipes end up a little "gummy" on the inside and that can be because they haven't been baked long enough (apparently over-proofing can also contribute to this). I don't know if you can tell from the above photo, but right in the center of the bread the crumb is a little too sticky.

All in all, I'm pleased with the results and I am enjoying having bread (and particularly toast) as a part of my life again.