The world is a shit-show so let's all tear our eyes away from the news and latest catastrophe and share a few things that bring us joy. There should be a little something for most people who find their way to this blog. Please chime in in the comments if you have suggestions for things that are getting you through because I could use as much joy as I can drag over the threshold.

Fruit Desserts for Breakfast
Based on what I've been eating this month, it might be hard to believe that I don't really have a sweet tooth. I do, however, love the process of baking and I love summer desserts that are made from fruit whose season is fleeting. One of the benefits of having picky eater kids (yes, still...) is that there is usually left-over dessert that I can enjoy for breakfast.
Lately, I've made these three recipes and they are all freaking fantastic as dessert but also can be enjoyed the next morning for breakfast: 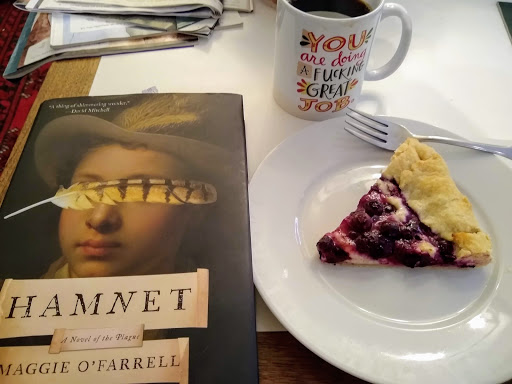 Blueberry Cream Cheese Galette
(scroll down to the third recipe in the linked article)
The only change I made was to use my own single pie crust recipe and I put all the crushed blueberry mixture on the cream cheese to bake while the original recipe reserves half to have a mix of raw and cooked (why? I have no idea. The raw squished berries looked kind of gloppy and unappealing so I just tossed it all on the cream cheese layer.) 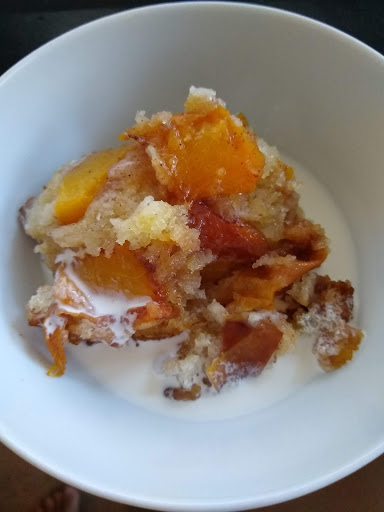 Texas Peach Cobbler
I used more peaches than the recipe called for, about 4 cups sliced, and I didn't peel them. I also served it with heavy cream rather than ice cream. Brown butter, peaches, cream, and absurdly easy. 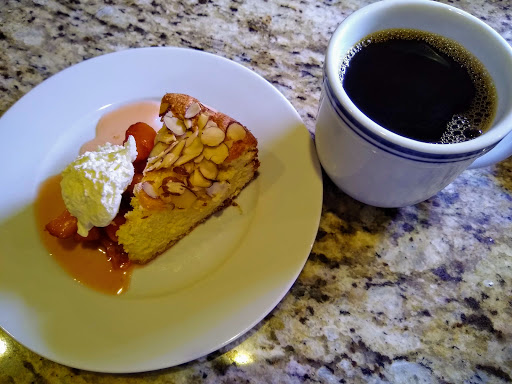 Italian Lemon Almond Cake with Honey Lemon Peaches and Honey Whipped Cream
I followed this gluten-free recipe to a T and added my own spin by serving it with diced peaches that had 1/2 a lemon squeezed over them and a spoonful of honey stirred in and about a cup of heavy cream whipped up with another spoonful of honey.
(For those of you thinking, "Wait, this is the only recipe that's gluten free but not that long ago Kate said she was avoiding gluten," well, I have an update on that at the end of this post.)*

I use Instagram differently from any other form of social media: it is where I curate my retreat from the world so there's a lot of joy there and not a lot of news. I follow recipe developers and knitting designers and people who post beautiful photos of far away places that allow me to dream of traveling again someday. Lately, I've been following lots of illustrators and two in particular have on-going projects that I look forward to and which bring me joy.

Watching a cephalopod poster come to life by artist Kelsey Oseid (@kelzuki)
Kelsey Oseid started a project last week to draw and paint 31 creatures from the order Cephalopoda (that's right! Octopuses, squids, cuttlefish, nautiluses!) to create one of her beautiful "Creatures of the Order" posters. It is simply magical to watch a sped up time-lapse video of a strawberry squid come to life. I already own a print of her Creatures of the Infraorder Cetacea (whales and dolphins) and am looking forward to purchasing a companion print when she completes this one.
Transmundane Tuesdays prompts by artist Carson Ellis and the resulting submissions
Artist and illustrator Carson Ellis posts a prompt made up of 3 random phrases on a Tuesday and then people submit their creations. The results are absolutely stunning and create such a sense of shared humanity: there are professional artists who submit, there are little kids, there is everyone in between. I look forward to her curated display of the previous week's prompts and am contemplating becoming more than just an observer and trying my hand at it even though words, rather than visual art mediums, are more my thing. This week's prompts were: 1. has a long beard 2. has butterfly wings 3. wearing glasses. The prompts always surprise and send my mind down myriad paths that aren't our current reality. One of my past favorite weeks was 1. is a baby 2. is made out of mud 3. is wearing a helmet. You can follow her feed @carsonellis where she has stories featuring some of her favorites of the week's submissions, follow the hashtag #transmundanetuesdays where all the submissions for all of the weeks reside or follow a tag for each individual week: this week's #beardedandwingedinglasses has some absolutely stunning works in there (a papercut! an embroidery! one that is made, I kid you not, entirely from pressed flowers!)

I've read a string of amazing books lately that have been balm to my soul in very different ways. If you are looking for some fiction to get you out of your present reality, maybe one of these will also appeal to you. I think all will make it onto my "best books of the year" list:
Deacon King Kong by James McBride
The Night Watchman by Louise Erdrich
Hamnet by Maggie O'Farrell
Apeirogon by Colum McCann
My reviews are posted both on my Books Read in 2020 page and on my Goodreads account.

I'm knitting two sweaters right now that bring me great pleasure: not only are the patterns well-written, but the two yarns I'm using are so different and both so lovely.
First up is the Wave of Change Jacket by Denise Bayron that I'm knitting in a linen tape yarn called Kestrel. Linen isn't the easiest fiber to knit with because it has little to no stretch (I likened the last time I knit with linen to the sensation of knitting with dental floss...) but this tape yarn is way better: the construction means that there is a little bit of give to it and the pattern uses big enough needles that it won't be an endless project (I still have a linen t-shirt that I started 3 years ago and didn't finish--fine yarn, little needles and just really not enjoying the process. I'll finish it someday, but not someday soon!) The linen is cool in my hands on a hot day and has a lovely sheen.
Here is a picture of the stunning designer wearing her linen version (the pattern is also written for chunky wool and my friend Carol is making a version so I'll get to see my jacket's winter sibling!) 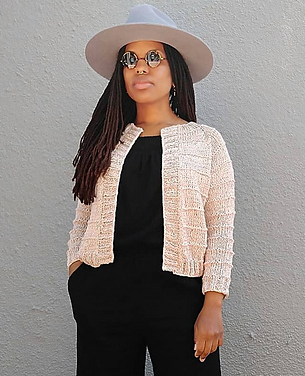 And I also just cast on to make this Bronwyn sweater: 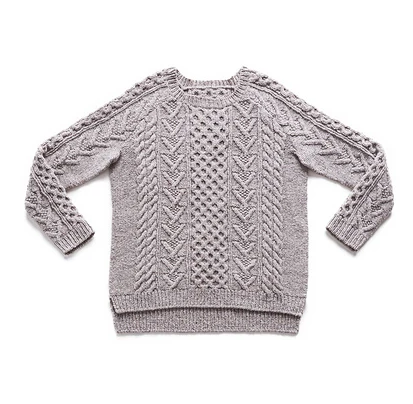 I'm using different yarn than what is called for in the pattern, Kelbourne Woolens Germantown in the color Natural; it's less expensive than the yarn pictured above and has really lovely stitch definition that should make the cables pop! I'm thinking of this as practice since one of my kids requested that I make them a version of Chris Evans' Aran sweater from the film Knives Out (the link takes you to a New Yorker article that discusses said sweater. Yes, it is a phenomenon). I found this pattern which looks pretty damn close to the movie sweater. We'll see if I'm burned out on cables when I finish the Bronwyn sweater (this is a pattern that I'll need to pay close attention to so I don't criss when I should cross) or on fire and reluctant to stop!
Please share your joys in the comments. I'd love to know how other people are coaxing their brains out of daily panic mode!
__________
*The status of gluten.
So I started going gluten-free at the beginning of February and I felt better: less joint pain, less digestive upset. I kept it up for a good 4 months while the world went fucking nuts. And then I decided to see what would happen if I tried gluten again. I made a batch of our favorite pasta al limone (fantastic recipe) and had a big bowl. And I didn't notice any difference. I went a few days, then tried gluten again with a big slab of my dad's homemade bread (he's an amazing bread baker.) Again, no difference. Huh. So what was going on that I had felt better when I went GF? A bunch of things I think. Placebo effect most likely contributed: I had felt helpless in the face of pain and discomfort and felt better because I was doing something. That feeling was probably compounded during the helplessness of the initial COVID-19 shut down when everything felt out of control (not that everything is hunky dory now, but at least we have more information so I don't feel quite so afraid of everything.) I also made some substitutions while GF that were probably pretty healthy: eating more whole grain brown rice and cornmeal instead of items made from white flour probably helped out both in the digestive realm and in controlling inflammation. I also frankly had the time and energy to focus on getting good at GF baking and welcomed the distraction from endless worrying. I am glad that I learned a lot about GF cooking and particularly baking since it led me to invest in ingredients that I didn't usually have around and to learn how to make safe, delicious foods for my GF friends. Going forward there will probably be some featured GF recipes here, but not exclusively GF.
Posted by Kate at 6:07 PM

My habit that keeps me sane is homemade chocolate pudding. I keep making small changes to the ingredient list to make it healthier. The current version is sweetened only with banana, and thickened with garbanzo flour, not cornstarch. I am sure that it would not appeal to everyone, but it is warm and sweet and chocolatey and quick, and it makes me glow happily inside.

My youngest has been requesting homemade chocolate pudding so thank you for the encouragement! I sounds soothing and rich and lovely!