Oh look, I made myself a slightly disturbing fuzzy friend: 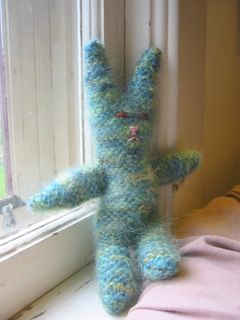 Just hanging out, being fuzzy.
I was trying to use the mohair yarn to make something wearable for my mother-in-law, but the scarf I started knitting looked like a muppet. So I decided to use the yarn to make my first knitted toy. It turned out ok though it did make me aware of how crappy my embroidery skills are--the eyes are pretty weird looking in person too. But it still seems to have kid appeal: my two-year-old spotted it as soon as she walked in the door, grabbed it and started yanking on the arms. I don't know how many more callisthenic sessions Mr. Fuzzy will survive, but he made it through his first encounter.

I could get into making knitted toys--it seems like a great way to use up some of my stash yarn that I can't figure out what else to do with. I think my next toy project will be a bit more ambitious--here's a free pattern for a knitted monkey that I'd like to make in some psychedelic colors.

Now, moving on to food. We all know that the key to being a sane parent is having a bulging file of good take-out menus. I have a new one to add. Yesterday I tried the take-out at the revamped Foods of India grocery store on Broadway. In the old store (located across the street and now being demolished for yet another condo development) there was a take-out window called Food n' Flavors and they had a pretty limited menu and only so-so food--the chicken curry was totally generic and the mattar paneer was ok, but nothing to write home about. In the new store, the take-out window has been renamed Shan-e-Punjab and the menu and food have improved a great deal. Now there is a much larger selection of vegetable dishes, chicken, lamb and seafood, biriyanis, naan and (not on the printed take-out menu, but posted near the window) some tandoori offerings.

Last night I ordered the Saag Paneer (spinach with cheese cubes) and Aloo Gobi (potatoes and cauliflower)--you can choose basmati rice or naan to go with them so I got one of each. 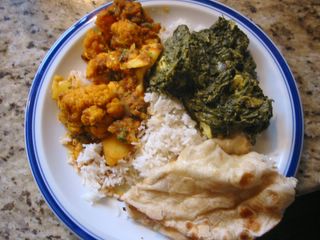 The chef likes to use lots of ginger which is fine with me, though I do wish it was grated finely rather than in large chunks. The naan was fantastic with a slick of ghee on the surface. The cauliflower in the aloo gobi was a little undercooked, but hey, he's using fresh cauliflower rather than frozen so I can't get too grumpy about that. The saag was thick and rich. And it was cheap, cheap, cheap. There's nothing on the menu over $7.95 (for the two seafood curries) and dinner last night cost $11.50 and was plenty for two people with healthy appetites. Next time I'll probably also order one of the lamb dishes so that my-better-and-meatier-half (aka Brian) will be content and so there will be enough for leftovers for lunch the next day. That addition will still keep the whole take-out under $20.
Posted by Kate at 5:37 PM

I love Mr. Fuzzy! Did you use a pattern, or just make him up as you went along? Either way, soft toys are so fun to make--they use minimal (stash!) materials, and it's neat to see them take shape. Plus, the kids love them!