Before I get started on last night's lovely evening with book group, I need to have a little rant:

If the new Pope ever counted on winning me over (granted, very low on his list of priorities) he lost me by denouncing the Harry Potter books. He claims that the books "distort Christianity in the soul", whatever the hell that means. I'll be among the millions of folks happily distorting my soul this weekend when the new book comes out.

Last night we met at Jen's house and in between baby admiration (McKinley has the most lovely curls I've ever seen on a 6-month-old) and stuffing face we discussed the book The News From Paraguay by Lily Tuck. There was not a person in the room who thought the book was worth reading, much less worth receiving the National Book Award. (I'm really hoping that my rant about the misogyny expressed in last year's awards has some more worthy books to defend in the other four finalists, because this isn't one I'd defend. MJ has said that the Joan Silber finalist Ideas of Heaven is good so I'm looking forward to reading it.)

This morning I've been trying to find a review that redeems the book, but instead, I found a review by Joanne Omang in the Washington Post that touches on all of our complaints. After a brief summary of the plot she writes:

But one keeps waiting for the moment when Ella will become an appealing human being, or when Franco will reveal the charisma he must have had, or when his sisters will emerge from their fat-slob stereotypes to become real people. Instead they stay remote and rather hard-edged, never engaging our emotions. The episodic style achieves many lovely moments but becomes tiresome as it introduces and then discards dozens of people who could be memorable. These include assorted diplomats, soldiers, relatives and Franco's adversaries, the legendary Brazilian Emperor Don Pedro and the Argentine Gen. Bartoleme Mitre, leaving each so unexplored and fleeting that they all become nearly interchangeable. One keeps flipping back to see who these characters are exactly, wondering if perhaps this colonel or that landowner will prove central to the story. They don't -- or rather, they are all equally relevant, evidently brought in because of their historical role in what actually happened.

That is unfortunate. It is a rule of serious fiction that there's no excuse for putting something in a novel just because it really happened. The sheer sprawl of Tuck's subject matter seems to have overwhelmed her; she has put it all into her story without focus, rather than pruning away the undergrowth to showcase the two lovers or to illumine the history they created. At the end nothing seems to have led to anything else, the myriad challenges and privations of war simply happen without transforming the characters' understanding, and key events transpire without context -- the war seems to have started and ended on its own. We emerge with neither a grasp of the historical period nor any feeling for its shapers, real or fictional.

Perhaps this frustrating approach is meant to evoke the disjointed nature of human experience, the measuring out of lives in coffee spoons, the inadequacy of memory, the sheer coquetry of chance and life and death, etc. If so, it is certainly just as frustrating as real life can be -- for example, when one is hoping to sit down with a vivid story and learn a little something about how to be a full human being while yet surviving during violent and turbulent times.

I think that just about sums up how we felt about the book, except that we used a number of expletives to express our frustration.

But once again, the food was terrific and perfect for a hot summer evening.
We started with a Paraguayan wine fruit punch called Clerico: 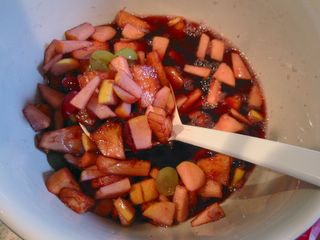 Which was served with a copious bowl of guacamole and chips: 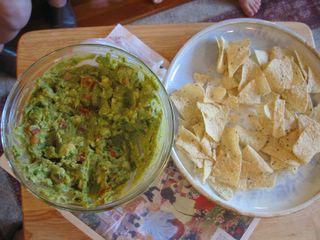 and then sat down to a dinner with tamales (courtesy of Sabor Latino--an eminently sane decision on Jen's part. I made tamales once at Lynne's house with a great group of women and, other than the terrific company, I came away thinking that homemade tamales are not worth all the effort), 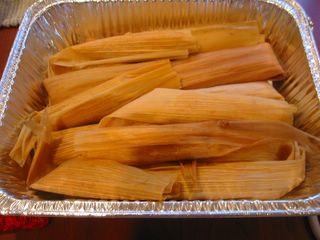 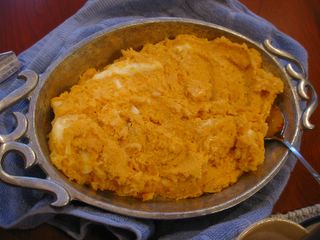 and another one of Marilyn's beautiful salads, this time with lots of citrus in it: 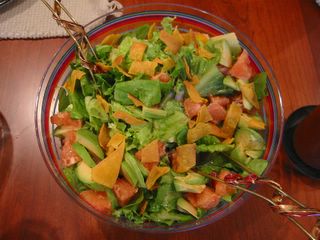 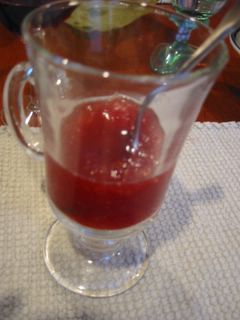 I'm always amazed (impressed?) by people who tell me that their book groups meet without food. The idea is so hard for me to wrap my brain around after almost 5 years worth of monthly feasts with books. And honestly, if we keep picking stinker books like this one, I think no one would come if it weren't for the food.

Of the last 10 books we read
only The Stone Diaries is one I'd recommend. Number 2, Disgrace, was at least interesting though I still wouldn't recommend it, but pretty much all the rest we thought were pretty lousy, in many different lousy ways.

Here's to hoping that another of the NBA finalists, Madeleine is Sleeping by Sarah Shun-lien Bynum, is a more rewarding read since that is what we decided to do next. At least I know the food will be good.
Posted by Kate at 6:13 AM

The question is, why should the Pope feel obliged to conform to your world view?

And Christopher, I'm going to assume that you didn't mean your comment in a hostile fashion (and were just being glib which I've noticed sometimes comes across as aggressive in email and blogland), and point out that I am hardly alone in my world view (estimate is that 10 million copies will be sold in the first 24 hours) and perhaps the Pope pissed off some of the disaffected Catholics that the church keeps saying they are trying to bring back to the fold. By attacking a book phenomenon that gets small children excited about reading and has nothing to do with a threatening belief system to Christianity--witchcraft and wizardy are genetic in Rowling's book, not an alternate religion, this Pope sure has shown some of his priorities. At least if he's going to attack it, come up with something more coherent and specific than "distort the Christian soul." I also have to wonder if the man doesn't think there is something going on in the world more significant than a creative work of fiction for him to be commenting on. Yup, the release of book 6 is an event, but it doesn't compare to the war in Iraq or Civil War in Sudan.

"It is a rule of serious fiction that there's no excuse for putting something in a novel just because it really happened."