Why I like knitting more that installing hardwood floors

Here are 5 reasons why I like knitting more than installing hardwood floors:
1. When knitting you don't get splinters jammed up your fingernails. Twice. In the same place.
2. You don't have to wear ear protection when knitting.
3. Unless you are a glutton for punishment, you don't have to kneel down on a hard floor and bruise your knees when knitting.
4. The scariest machine that you encounter when knitting is a sewing machine, and then only if you are doing that freaky Norwegian sew-and-cut type of knitting (which I have done on a few occasions and which still makes me sweat with anxiety at the thought). Yesterday I learned to use the compound miter saw. I had visions of severed digits every time I used it (which also would have ruined my ability to knit.)
5. It is brain numbingly boring: there is no way to multi-task when installing floors--it's too loud to listen to music or a book on tape, you can't talk to your fellow installer because you both have the big ear protecting muffs on, you can't really eat or drink because your hands are occupied.

On the positive side, look how pretty my current knitting looks against that new (still unfinished) red oak floor: 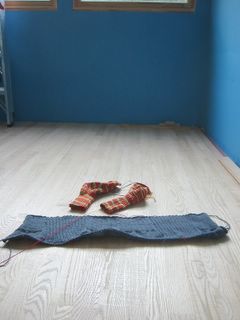 I think I've made some pretty good progress on the Ribby cardi that I am attempting to knit in the round. And the second sock has been finished to the point of the toe decreases which means I'll have to find the pattern somewhere in the still-unorganized-from-the-California-trip crap that is scattered all over the house.

This would be a good time to express my disappointment about not being able to visit Artfibers while in San Francisco. We were in SF for 4 days, the first of which was taken over by the evil Thrifty Car Rental company (imagine a car rental company that runs out of cars), the last of which I was on my own with the entropy kids which is no condition for visiting a yarn store (Brian was actually out there for work testing cars so I can't even gripe about his absence) and the middle two days were over the Gay Pride weekend. When I lived in the Bay Area the Gay Pride parade was a big deal that took over the downtown for one full Sunday. They closed down Market street and the parade went from down by the Embarcadaro up to the Civic Center and sprawled into all the adjoining streets (Union Square in particular). Well, it's now two full days titled "Lesbian/Gay/Bisexual/Transgender Pride Celebration" and the days are filled with parades, concerts, celebrations, and general pageantry. Normally this would make me pretty happy since it is a great scene with fun and colorful parades and the many moments of positive community are very heartening to a cynic like me. But damn it, Artfibers is located right off of Union Square! There really was no way of getting to it over that weekend.

To look on the bright side, we did get to see and hear about 600 Dykes on Bikes gunning their motorcycles engines down at the base of Market Street.
Posted by Kate at 6:54 AM