I am no organization queen. Far from it. But to prepare for the chaos that will be this week of solo parenting (Brian is off in sunny Phoenix again) I decided that I would clean out a few of my kitchen cabinets. Because we all know that if your kitchen cabinets are organized and tidy then you won't lose it and start drinking gin at 3 pm. (Though I'm out of gin after taco night so I'll have to venture into the disorganized booze cabinet and see what else is hiding there.)

This urge to organize in a vain attempt to feel in control of your life reminds me of my friend Lee who decided the night before she was to host a baby shower that had been foisted on her and that she didn't want to host that she simply had to alphabetize all her books rather than clean or cook. And this woman has a lot of books. But you know, the next day when people arrived at her kinda dusty, disheveled house and ate supermarket hummus and crackers she felt a whole lot better about the whole enterprise because all the Margaret Atwood books were together on the shelf. And really, a happy host has a big impact on a party.

Often when I open this cabinet: 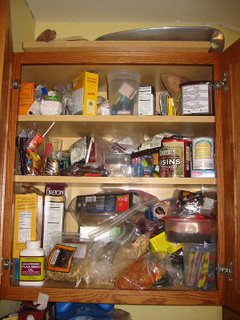 something falls on me. Here you see the impressive engineering feat (and you thought Brian was the one with the engineering talent in the family! Ha!) that is my cabinet: teetering packages of crackers, a precariously balanced container of currants and a bunch of stuff on the top shelf that I don't think I've looked at (or for) in a few years.

I also decided to tackle this cabinet: 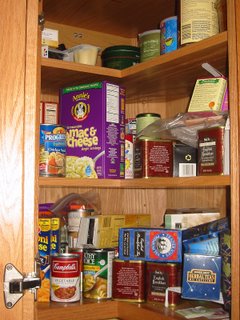 Tea towers to the right and piles of cans to the left with a few miscellaneous items hiding in the back.

The scariest things that I found were these: 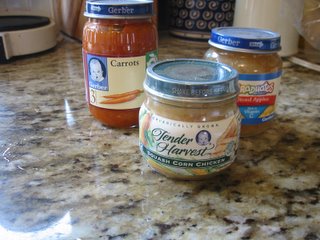 Half a day later, this is what the two cabinets look like: 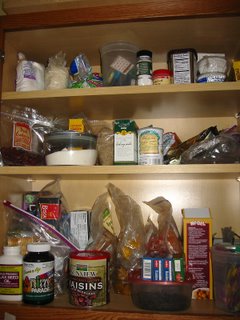 Raisin boxes lined up with almost military precision! Nothing threatening to bonk me on the nose when I open the door! 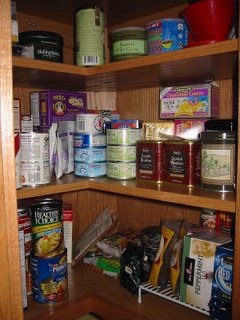 Oh my, you can actually find what you are looking for in this cabinet. And no scary baby food either.

So this week, when the kids make me cuckoo and I can't stand the chaos that is the rest of my life, I plan to open the doors of these two cabinets and just gaze at the order and (hopefully) remember that life will not always be insane. And if the view doesn't quite do it on its own, I'll try gazing at the cabinets with a vodka tonic in hand.
Posted by Kate at 3:57 PM

Just looking at those photos gives me a sense of calm.

A few years ago, Lou and I undertook a huge, huge -- did I say huge? -- purge and reorganization of the basement. The flattened cardboard boxes alone reached chest height. When it was all done, we kept going downstairs and just standing there, looking. It's time to do another one, I'm afraid, but for a while it was glorious.

Kate, you'd like the Discardia and Discardian blogs written by my friend Dinah - she's very much of the less clutter school of thinking.

Hey, Kate, when did you sneak into my house and take pictures of my kitchen cupboards? (The Before pictures, I mean, of course.) Congrats on your reorganization. How satisfying.

I just keep buying more laundry baskets to put my crap in...

You wait until 3 to drink your gin??? I got you beat! LOL

Anyway, thanks for stopping by my blog. I really appreciate you leaving a comment to say hola. I will definitely add you to my bloglines so I can keep up with your adventures!

Oh dear...stuffing is one of my most hated foods (and one of my husband's favorite foods--let's not go into that marital rift) so I think I'm gonna pass on the apricot studded stuffing...

Hi, I'm here via Julie's blog trying to catch a photo of you so I'd recognize you at the pool when I fly to your area. Instead, I see cabinets that look suspiciously like certain areas of my house. ;)
Love the gin comment!

However, I also adore the alphebetizing one's books compulsion overriding cleaning or cooking!!!! She has chutzpah and a healthy self-image. I'm glad you feel better. Sometimes I feel great making a (creative) mess. Othertimes, organizing is just as freeing.