Because I have the attention span of a flea and because I got a really good deal on the yarn, I started yet another knitting project, this time making bumpy cables: 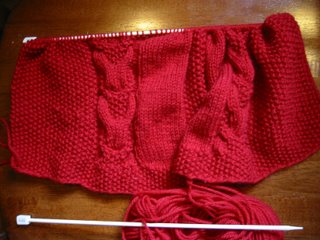 At first I thought the bumpy (seed stitched) cables were kind of creepy, like they had sprouted pimples or something. But I'm growing fond of them. So far I've messed up the cables and had to redo them twice, which is a pretty good run for me. I don't often make cabled stuff because I don't have that attention-to-detail sort of personality and will knit along happily and then look back and realized I've twisted one cable (usually way at the bottom) the wrong way. Much cursing then ensues.

So I'm trying to train myself to stop and look at what I've done fairly regularly so that I catch mistakes before I've gone on too far.

I do really love this yarn--it isn't some fancy schmancy fiber--just Paton's Merino that I got on sale at Joann.com. But it is soft and springy and very red. I'm making the sweater pictured below (I bought the pattern at Elann): 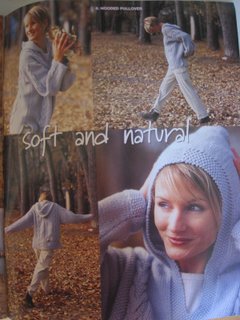 and yarn for the entire sweater cost $42 (and that includes shipping--the yarn was on sale for $5 for a 100 gm ball and I had a 20% off coupon). And for once, I am actually using the yarn that is called for in a pattern and I'm following the pattern rather than making lots of changes. I was quite tempted to do some modifications, particularly to all the seed stitch panels, but finally decided that a) I kinda like the pattern as it is written and b) I'm sick of dealing with all my "I'm smarter than the pattern" blunders (see all the damn mistakes I made on that Ribby cardigan). It is humbling, but true--I am not smarter than the pattern. So I'm actually going to try and complete this sweater by (gasp) following the rules!
Posted by Kate at 1:08 PM

Looks promising! I'm so jealous of people who can wear red. I adore red; it does not adore me. Unless "adore" means "to cast a sickly yellowish pallor upon".

Great job on the cables! Love the pattern! :)

That sweater looks super cute. I like the bumpy cables! I suck at knitting, so anyone who can do fancy stuff like cables is my hero!

I'm with Nixie; it's taken me two months to master single crochet, so I'm in awe of your abilities.

Found your blog via your comment on mine and I love it--your list of recipes alone makes me swoon.

I agree with mary jean about the red (not that it looks bad on her)--I love it too and it looks great on you.