I've got a new buddy in the kitchen: 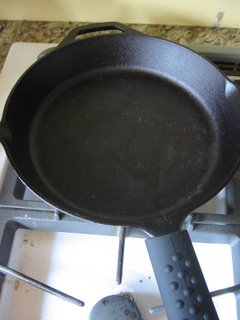 I've been a little slow on the uptake here but cast iron is fantastic! About a month ago I bought an already seasoned Lodge cast iron frying pan from Amazon (you can get them locally at Kitchenport, but Kitchenport is far too dangerous a place for me to enter with a three year old). There has been a buzz about the dangers of Teflon among the avian-owning community (of which I am not a member). Enough food freaks have heard about how Teflon fumes can kill a budgie and started thinking twice about frying their eggs in the self-same bird-killer pan. The NY Times magazine had a funny article by Chef Daniel Patterson whose environmentalist girlfriend made him get rid of all his Teflon pans; his quest to make light scrambled eggs finally arrived at a fairly involved process of poaching scrambled eggs and straining them.

I'm too lazy for all that rigmarole before I'm fully caffeinated, so I thought I'd try the old fashioned non-stick pan: seasoned cast iron. It may not be the greatest pan for scrambled eggs (I still risk the Teflon for my slow cooked creamy scrambled eggs), but for pretty much every other cooking task for which I used to reach for a non-stick pan, I now use the cast iron. Fried eggs, pancakes, chicken paillards, grilled cheese sandwiches, so far nothing has stuck to it. I was concerned that the garlic loaded chicken would lead to garlic flavored pancakes the next morning, but a soak in hot water and a soap-less scrub with a brush got out any offending odor or flavor.

The only downside is the weight. The pan lives on my cooktop even when not in use because it is so damn heavy I fear I will brain myself if I keep it up on the high shelf where I store my other pots. I also bought a silicon tube-like thingy to slip over the handle so I don't inadvertently fry my palm when the pan is hot.

Last night my new buddy helped me to make dinner: 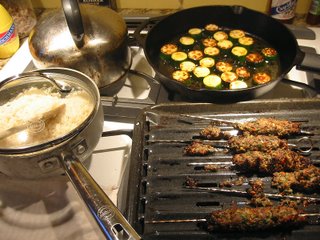 I finally got around to making the kafta recipe from January's Gourmet magazine. It was good, though I advise anyone who thinks about making the kafta to abandon the grill and cook the kebabs under the broiler. I started these on the grill and after losing about a third of the quantity of each meat stick to gravity and flames, I very carefully eased them off of the grill (one big spatula and a pair of tongs) and onto my broiler pan. I think if I had stuck with the grill we each would have had one mere morsel of meat and the rest would have fallen to its ruin. How the hell you are supposed to get a ground meat mixture to stick to skewers I do not know. Maybe bamboo skewers would help, but I only have metal ones.

The kafta flavor was really good--the right amount of spice, herbs and pine nuts to highlight the lamb without overwhelming it. I was underwhelmed by the zucchini chunks that the recipe included. They were marinated in a lemon-olive oil mixture and were supposed to be grilled too, but as I had run out of skewers I popped them in my new buddy and cooked them on the stove top. The skillet cooked them up perfectly with nicely browned sides, but the flavor was just too bland next to the assertively spiced kafta. 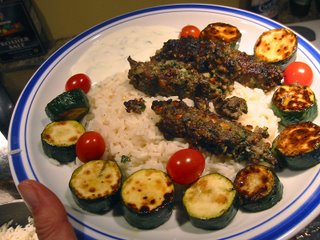 I altered the yogurt sauce that goes with the kafta and made it more like a tatziki sauce with grated cucumber instead of chopped mint. Mint would be nice when I have a big tuft of it growing in a pot on my deck, but the effort of tracking down mint in March in Michigan I deemed not worth the effort. I also put only a teeny bit of garlic in the yogurt sauce so that a small girl would eat it and eat it she did--she tried pulling the whole bowl over to her place and digging in with her spoon. It took a bit of convincing that the yogurt sauce was to be shared by everyone at the table.

Next time I make the kafta I'll probably skip the zucchini, rice and yogurt sauce and serve it with hummus, good pita bread and a romaine/tomato/cucumber salad tossed with lemon, olive oil, salt and sumac. And hell, maybe I'll try and pan fry the meat tubes in my new buddy and skip both grill and broiler.
Posted by Kate at 7:56 AM

Kate, Cast Iron is fantastic and gets better and better with age. I pretty much cook with cast iron and revere ware with the occasional fancy pants stainless all clad and some enamel thrown in the mix. The stainless wanna be frying pans just can not match up. I am wondering what is on the handle of your new buddy? Is it a heat resistant sleeve? Keep on cooking and writing.
Erica

Can I come live with you?

I have small feathered "babies" that rule my life, and so I have forsworn the likes of teflon. Probablly not a bad thing when you think of my mom's pans where the teflon has been scraped off. Where did it all go? And If I consume enough of it will I be non-stick too?

Mmm...always looking for a better kefta recipe. We love lamb over here.

Ooh, that looks so good!
Aparently I live under a rock and haven't yet heard about the Teflon hype.