I'm having some success and some failure when processing the current bounty of pears. I made pear sorbet, 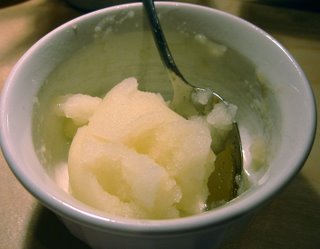 though I would call it more of a granita than a sorbet. It has some Poire William brandy in it (maybe a little too much brandy if you wanted to serve it to small people, though Fiona lapped up the stuff) and whether it is the alcohol or the relatively low sugar content (only 1/3 C) or maybe just my not-so-schwoopy ice cream maker, it never really hardened up. But the slushy stuff was delicious.

Then I made some pear muffins that weren't so great. 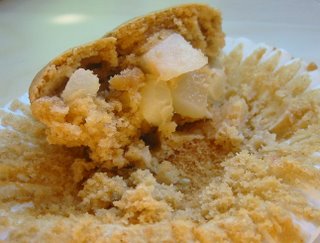 They looked kind of pretty and used two whole cups of pear pieces, but the batter was too cakey for my liking (I like a sturdier muffin) and had a weird after taste--like the bitterness of the baking powder was the final flavor on your tongue. Ewwwww. The pear pieces were the best part of the muffins and I found myself picking them out and leaving the cakey bits.

I love the suggestions folks have been sending in but unfortunately, I don't think I'll be able to do any of the whole (or even halved) poached pears which require long stretches of intact fruit. Compared to commercial pears, these lovely little honey bombs are 1) small and 2) likely to have at least one wee worm residing inside. 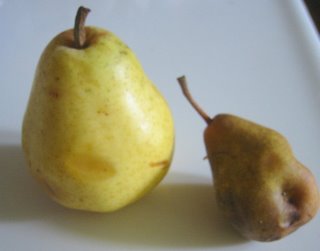 See the difference?
I like the idea of turning the rest of my lumpy supply into chutney, as one person suggested in the comments section of my previous pear post. I love a grilled sharp cheddar and chutney sandwich, preferably on Zingerman's Farm Bread.
Posted by Kate at 12:37 PM

Katy,
Soraya has a pear tree as well and I remember her talking about making Pear butter with them which was very, very yummy. No recipe, but just an idea!