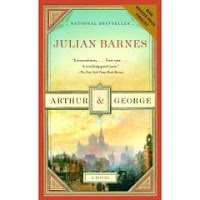 There are certain authors that have somehow passed under my radar and have a large number of acclaimed books that I've never read. Julian Barnes was one of those authors, but I'm happy to say, he is neglected no more! I just finished reading his Arthur & George and loved it.

At first I thought I wouldn't be moved by a story about the intersection of a cautious nobody (a half-Indian, half -Scottish solicitor) who is accused of a heinous crime he clearly did not commit and a flagrant celebrity (Sir Arthur Conan Doyle) who comes to his rescue, but I was wrong. For the first 220 pages their two stories don't connect at all. The reader is going back and forth between a persecuted, dull man and an exuberant romantic. But then on page 221 the first connection is made and both characters grow and expand in unanticipated ways.

The story is also true--Sir Arthur Conan Doyle did take up the case of George Edalji and did, in a way, save him from a miserable life, and also influenced the creation of a court of appeals in English law. But the story is far from an example of celebrity generosity to an overlooked man. The book twined their two stories together beautifully and the huge gap between the introvert and extrovert, the realist and the romantic, the quiet and the boisterous, the fearful and the fearless, was somehow closed.

The detective work on the facts of the crime which George is accused of committing then seeps into broader expressions of belief: George's Vicar father's belief in God, Doyles' belief in spiritualism and most of all, both characters belief in England.

The overarching themes were beautifully handled, but so too was the prose on a minute level--there are wonderful quiet displays of wit. Here is the doubting George trying hard to accept Doyle's belief in spiritualism by attending a huge group spiritualist gathering held to celebrate Doyle's passing into the next realm:

"George listens to the crowd of spirits being given feeling description. The impression is that they are all clamouring for attention, fighting to convey their messages. A facetious if logical question comes into George's mind, from where he cannot tell, unless as a reaction to all this unwonted intensity. If these are indeed the spirits of Englishmen and Englishwomen who have passed over into the next world, surely they would know how to form a proper queue? If they have been promoted to a higher state, why have they been reduced to such an importunate rabble?"

I love the fact that George would be more likely to believe in spirits if the dead English people behaved properly and waited their turn to access the medium.

I'm looking forward to reading more Barnes, particularly Flaubert's Parrot and History of the World in 10 1/2 Chapters. And there are plenty more books to follow.
Posted by Kate at 4:20 PM

Hi! Comment on your previous blog "All the tea in China"-

I started it last night so won't read your blog till I'm finished. Enjoying so far. Did you see Y@Canton deciphered your tea!