Yea! I got a response/translation/information about the Tea that Brian brought back from China for me! Isn't the web wonderful? The info was left in the comments section, but I'm re posting it here so all can benefit from the wisdom. Can't wait to try the monkey-picked tea (bright green box)! 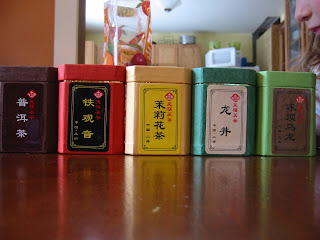 1.Pu-Er:
Originally from Yun-nan province. Taste is mild(but could be weird to some people). Tea made from it is so dark that you recognize it immediately(and got a good coloring effect). Strongly recommended after each greasy meal. It washes out the fat/calorie you eat, yet won't cause uncomfortable feeling even if you drink a lot on a regular basis. Its function is common knowledge in Canton area where I'm from; It's not my favorite though.

2. Tie-Guan-Yin:
Most-popular pick in Canton morning-tea and other tea sessions. Nice after-taste. Smells really good...Also wash out fat. But don't over do it.

3. Like you said, jasmine tea. It's tea that absorbed jasmine aroma during the making. I think it's weird taste...just not what pure tea is like to me.

4. Long-Jing:
Quite popular in other provinces, but definitely not in Canton. I don't drink it much, so I'm not allowed to make a comment on it. Quite light compared to 2nd.

5. Dong-Ding-Wu-Long:
Expensive stuff if this is the genuine stuff. The name comes from the legend that: this tea only grows in mountains that only monkeys can climb on and pick, thus making it real...special. Originated from Taiwan I think. I don't remember what that taste like, let me know after you've tried it?
Posted by Kate at 11:04 AM

Note:
With Dong-ding-wu-long, it's supposed to taste even better when you add water to the same pinch of tea-leaves for the third time(good up to four times maybe), so don't throw the tea-leaves out after first-session.