I was very virtuous and used yarn that I salvaged from a sweater I knit back in the early 90s (think dated geometric triangles and stripes...) to make this sweater vest: 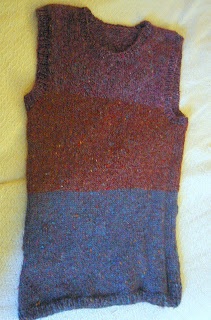 The photo is a bit warped due to the angle I took the photo, but essentially it is a long knit tube. I didn't use a pattern, just cast on circular needles and added a little 1x1 ribbing up either side of the rib cages to give it a little flex and not to have to worry about shaping.

I made it to address the fashion conundrum that I've had of late. I've had a revulsion for confinement around my waist area my whole life so I love reasonably low-rise jeans (not the butt-crack showing super low-rise pants, but the normalish low-rise jeans). I've essentially been wearing low rise jeans all my life; before they made them for women, I bought men's jeans which are naturally lower in the rise department.

But while the fashion industry has been dropping the waistband of women's jeans, they haven't been lengthening the hems of shirts. If I was a different demographic I probably wouldn't mind showing off my midrif now and again. But this style is not kind for a) the unemaciated or b) pretty much anyone who has had a kid and doesn't have a personal trainer or c) anyone who doesn't like a draft of cold air wafting around their middle.

Thus the vest. It is long, designed to cover that gap between shirt bottom and jean top, to keep my tummy to myself and to stop the damn draft.

Since I was so virtuous using old yarn and no pattern for the vest, I figured I deserved a treat. So yesterday I went to Flying Sheep and bought this pattern: 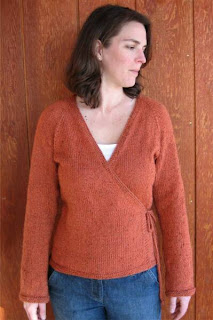 And then went on-line and bought this yarn with which to make the above sweater:

This wasn't my first choice of pattern--I really want to make the Paton's Urban Aran sweater:

from the Street Smart booklet: 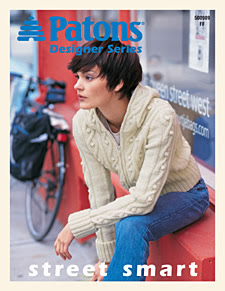 But everyone is out of the pattern and are waiting for reprints. When I eventually get my greedy hands on the pattern, I plan to make it a zipper cardigan like the beautiful one seen at brooklyntweed, though in charcoal gray.
Posted by Kate at 9:29 AM

I love reading about your knitting - I live vicariously through it as I've often tried to become a knitter, and sadly, I am just not. The wrap sweater looks lovely, I'm sure you'll enjoy it!

The midriff thing is one I totally "get", especially after having Ellie. Even though I've lost the weight and I'm "trying to get in shape", my stomach will not be bouncing back any time soon...just bouncing, a little :)

Hi Kate,
I told you I read your blog, right? :)
Well, I can't wait to see the vest in person at swimming.
BTW, how'd you find time to post on this wonderful snow day with little people??

What a great vest! I like that you're filling in the fashion industry's omissions, singlehandedly. Singlemidriffly. I want to see this vest modeled!

And the brooklyntweed cardigan is gorgeous.

I actually finished a knitting project myself while lying on the couch recovering from a virus. It's an old Minnowknits pattern - a vest for a two-year-old - so it didn't require much thought. But I lay there and sewed in loose ends while my children were doing something blessedly out of earshot.

Now I need another project.

I love the wrap-sweater. I'm currently working on a blanket from Mason-Dixon knitting. It's been five months and counting. I'm desperately trying to finish it while it's still winter. I keep promising myself that after this blanket I'll knit a nice sweater.

Kate, the brooklyn tweed guy designed a sweater in fall 07 interweave knits called the Cobblestone pullover that I really like and seems like a beautifully designed pattern (it is for me though).

Hmmmm I do have that pattern book you know if you wanted to borrow it....