The YA flood continues

The good YA reads just keep coming and coming! In the past few weeks I have been lucky to read two new YA books, both of which focus on distopian futures. Each has a strong main character who is shown struggling to conform to oppressive regimes and ultimately resisting them. If you like happy versions of the future, these might not be for you. But if you get inspired by the resilience of people who are faced with way worse situations than you have ever found yourself in, then you might want to pick up these two. 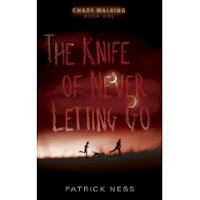 The Knife of Never Letting Go by Patrick Ness grabbed me at the first page and didn't let go. Actually, it grabbed me at the first sentence: "The first thing you find out when your dog learns to talk is that dogs don't got nothing much to say." Of course, if you don't like excitable talking dogs, perhaps you won't be charmed as quickly as I was.

I don't want to summarize the book, because the world is revealed as the main character, Todd, learns what is real and what is propaganda and much of the narrative momentum comes through his perceptions with all of the limitations. His voice is distinct and grouchy and confused and beautiful. And then there is Noise. I don't want to wreck it for you, but I have to say that the author's rendering of Noise was fantastic.

This is a "chase" book and the pace is appropriately breathless. So it combines distopia/thriller with a poignant story about a boy coming of age. In plenty of hands this combo would be a royal mess, but Ness pulls it off.

The only negative comment I have is something that wasn't exactly unexpected. The subtitle of the book is "Chaos Walking: Book One" so from the get go I knew that the story wouldn't end at the end of the book. But did it have to be quite so cliff-hanger-y? I promise, I wanted to read book two even without the anxiety producing ending. 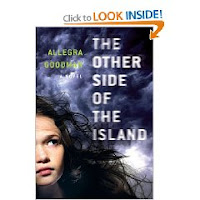 I wasn't the biggest fan of Allegra Goodman's most recent grown-up novel, Intuition, but I did really like two of her other novels: The Family Markowitz and Kaaterskill Falls. The Other Side of the Island is her first YA novel and it imagines the world after global warming has raised the sea level to such an extent that the only habitable land consists of former mountain tops, now islands. A repressive regime controls most of the islands and sees anyone who does not subscribe to their goals to enclose the islands under domes and submit to an extreme regulation of life as a threat. The main character's parents are non-conformists and one of the more compelling strands of the novel involves her conflicting feelings towards them and her understandable desire for the easy answer to be the right answer (which, of course, it rarely is).

It's a good read, not a book with the depth and intensity of Knife, but I enjoyed it and think that it would make a pre-teen/teen think a whole lot about conformity, the price that is paid for fitting in, and the meanings that lie under patriotic slogans.
Posted by Kate at 12:41 PM

Those both sound interesting. I'm a fan of well-done YA, but my main issue is that so much of it is NOT well done.

I really enjoyed The Outcasts of 19 Schuyler Place by E. L. Konigsburg. It's really a middle years book, but I think the quality makes it enjoyable for ages 10 and up.

Oooh thanks for the rec, Jen! I'll check that one out.

I liked The Other Side of the Island quite a bit, too (it reminded me a little of Andre Norton's Outside, from the 70s). Have you read The Hunger Games yet?

Have any of you read any Rosemary Sutcliff? She's a British writer who writes (wrote--in the 70s probably) extremely compelling historical novels set in Roman Britain and later--dark ages. Very realistic and evocative. I love her books myself and am always trying to share them with folks. I suggest starting with The Eagle of the Ninth. They make great read-alouds, too. Be careful though, some of them are sad. :-)
- Mary (Community Farm Kitchen)