Last weekend, Brian decided to transform our crappy grill into something much more interesting: 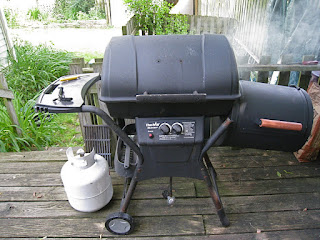 It looks a little ridiculous with the big honking smoker attachment but I tell you people, it WORKS. (The alarming looking angle of the smoker is due to the way it is bolted to an angled side of the grill--not because the whole thing is leaning that way). I had my doubts when he was rigging the thing up on Saturday but I should know better than to doubt the man's mechanical abilities, especially when motivated by the possibility of churning out large quantities of smoked meat. And yes, it still works as a gas grill too. (If anyone is interested in how he did it, let me know and I'll pry it out of him. It did involve some noisy drilling at which point in time I ran inside and slammed the door.)

Allow me to display some of the beauteous offerings that he smoked on Father's Day (yes, he chose to spend his Father's Day enveloped in clouds of hickory smoke. We provided him with plenty of beer to keep him happy out there.) 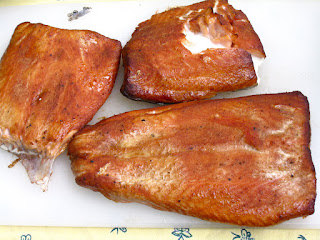 The smoked salmon was revelatory. I made a tzatziki sauce to go with it. 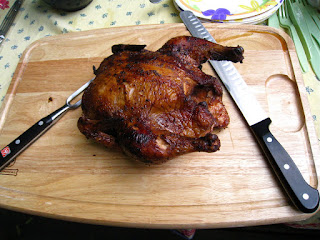 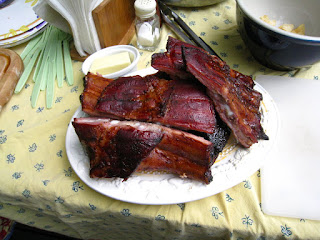 And his favorite, smoked pork ribs. I'm not the biggest rib fan (I prefer pulled pork) but I had one and they were good. We went with a simple dry rub that consisted of paprika, brown sugar, kosher salt and black pepper for all three smoked protein products. They were brushed occasionally with a little apple juice while on the smoker. That was it!

I made some sides, but neglected to photograph them: Alice Waters' Cole Slaw, a redskin potato salad with snap peas and avocado doused with the creamy salad dressing, and plenty of sweet corn on the cob.

I did remember to take a photo of dessert though: 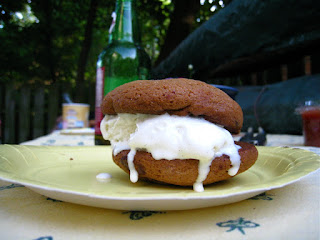 Homemade chocolate chip cookies with (purchased) vanilla bean ice cream. Isn't this what Summer is supposed to look like?
Posted by Kate at 7:36 AM

Wow... can I borrow the smoker? And your husband? This stuff looks wonderful!