Last Sunday I transformed these: 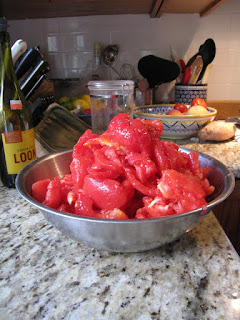 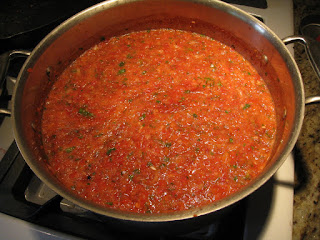 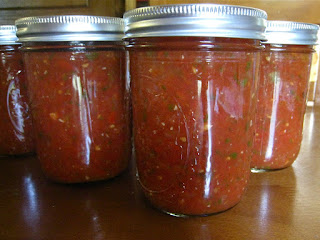 I've made plenty of fresh salsa, but never took the effort to preserve the stuff. Last spring, after tasting the salsa that one of Brian's co-workers made, I was inspired to make an attempt this year. John (the co-worker who might be a teeny bit obsessive since he has canned 46 jars of salsa so far this year...) was kind enough to share his recipe with me and the Farmer's Market cooperated by providing me with a peck of Roma seconds for $4 (I got there at about 8:30 am and think I may have got the last peck of Roma seconds. There were plenty more regular tomato seconds though.)

So long as you have a food processor, making this stuff is a breeze. Without it, the daunting quantity of chopping might push it into the 'labor of love' category, but the taste was really terrific--full rounded flavor, little edge and kick, and very difficult to stop eating.

Salsa
makes about 6.5 pints (6 jars and a container to eat RIGHT NOW)

Get your food processor ready for some action: with the S-blade roughly chop the tomatoes (in a couple of batches). Dump into a big pot.

Then fine chop the garlic and jalapenos, add the onions and peppers and chop until smallish but not reduced to a pulp. Then add the cilantro and pulse a few times to chop it. Dump into the big pot.

Mix in the brown sugar, vinegar, and salt and bring to a boil. Then simmer for 2-3 hours, stirring frequently so bottom does not scorch.

Prior to filling jars, heat the jars and lids in boiling water for ten minutes.

Fill jars with hot salsa, wipe the rim with a clean towel and cover with lids. Then screw on the ring. Be careful to keep everything clean when boiling and filling jars.

If you are a "proper canner" and have the deep pot/rack/jar lifter, go ahead and process the jars in a hot water bath. If you are a) lazy b) equipment challenged c) willing to risk a little (salsa is high in acid and salt so the likelihood of it poisoning you is much lower than some non-acidic, non-salty food) you can do the sloth version. Set the jars on the counter and as they cool down they should seal (my mom always flipped the jars over so they were resting on their lids with the hot contents in contact with the metal--I'm not sure if it is supposed to help the seal or if it is just a compulsive quirk, but I do it too). If jar does not seal it must be refrigerated (press the lid and if it gives and makes a little popping sound, then it didn't seal).
Posted by Kate at 8:13 AM

After spending all that time making what I wanted to can, I wouldn't want to risk a bad seal, which is what you can get with open kettle canning (the process you describe). So, it's worth that extra minutes of time canning it right to me....it's just boiling a pot of water. Doesn't require any special equipment - if you don't have a canner, just a deep pot that you line the bottom with canning rings will do the job. Last time I had a bad seal on a jar, I was so bummed!