It's been a good long while since I blogged about a restaurant. I haven't been eating out much and when I do its usually just a rushed post-gym dinner at our favorite Korean local, Maru, or for a beer and sandwich at a brew pub. But yesterday I joined some friends for a holiday lunch. Since only one of us works in a traditional office where holiday parties are the norm, we made our own little celebration and decided to try Eve Arranoff's new place Frita Batidos.

I got there before the lunch rush began and it was quiet and very, very white. It's a casual place with (white) picnic tables and all hard surfaces so while it was quiet when we arrived, once the traffic picked up, the noise level was approaching uncomfortable. I'm not sure my sensitive ears could handle a boisterous late night crowd.

But the food! Oh my the food! I ordered a black bean frita with tropical coleslaw on top and a side of the twice fried plantains. The black bean patties I've had in the past have been leaden and heavy and feel a bit like a punishment for choosing them over meat. But these are creamy and flavorful and really rewarding. I didn't wish I was eating another friends big Cuban sandwich, delicious though it looked. 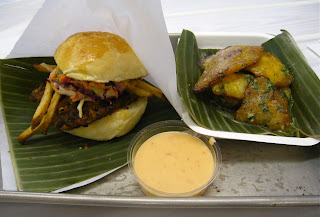 This may not look like a huge amount of food for $14, which is more than I usually spend on lunch, but it is all so rich that it was amazingly filling; I wasn't hungry when dinner time rolled around and since I'm one of those people with a hobbit-like tendency to eat every three hours or so, that's saying something.  If I worked downtown I could see getting just the black bean frita with a side of tropical slaw (it was good on top, but I think I'd like it even better on the side); that would set me back $8 and mean that I wouldn't be feeling stuffed. But those plantains were amazing and amazingly rich. They are drenched in a garlic-cilantro butter and accompanied by a sweet chili mayo for dipping. They melt on your tongue and the combination of the sweet plantain and the rich butter, combined with the bright flavors of the garlic and cilantro is just magical. This place is open late and I could see coming here after a show for an alcohol-soaking up plantain gorging.

If you have a sweet tooth, as one of my friends most decidedly does, then you should try the churros with chocolate Espanol.  It was a huge portion which meant we each got to sample them without depriving her of the blood sugar spike she so desired. 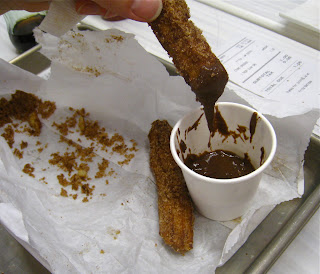 They were the best churros I've ever tasted--the dough is flecked with orange peel and nutmeg, they are rolled in cinnamon sugar, and the chocolate is like warm, cinnamon-spiked ganache. I'd say one order could easily satisfy two sweet-tooths or four normal-tooths.

None of us tried the batidos--I was chilled from walking downtown on a windy cold day so I'm going to wait until the weather is more conducive to the consumption of ice to give those a try.
Posted by Kate at 7:47 AM

I was thinking about "Knights" for my birthday tomorrow. However, this review has me thinking something different now.

I like the the churros always taste super fresh.

We went in late December and I ordered the "hot chocolate" off the drink menu - it was the same as what they give you for churros. It was more like a pudding consistency than what I expect from hot chocolate, but it was OH SO GOOD. [The pulled pork sandwich was fab, too, but my memories are spiked with the chocolate, not the sandwich...]