Getting weepy on the stairmaster 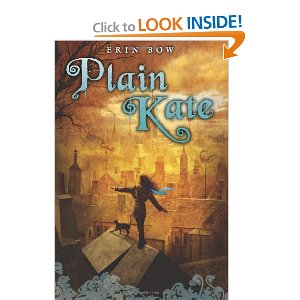 I was at the gym the other night stomping away on the stairmaster when all of a sudden everything got sort of blurry. No, I wasn't going so fast that the machine was smoking (ha!), nor was my vision deteriorating more than its already crappy state; I was reading the final chapters of the wonderful book Plain Kate by Erin Bow and my eyes were responding appropriately.

This is a wonderful book. The story is about a young girl and is set in a vaguely Russian-ish land with prominent characters who are members of a traveling Roma family. The story has elements of magic and mystery, but primarily it is about loneliness and belonging.

None of the characters are simple--almost all of them have been deeply hurt by the world--and none of their feelings are simple. The best example is the villain of the piece, who I absolutely hated for preying on Kate at times, and for whom I felt a deep sympathy for his suffering at others. Kate is also unsure what to feel or think about him: fear? pity? friend? enemy?  There's no simple way to render a character who steals from Kate but also saves her, and I loved this complexity.

You'd think that with such layered characters the book would be long and it would take a lot of text to convey such complicated feelings and characters. But there is a remarkable economy to the language--it is lyrical, yet spare. It didn't feel like there were any extraneous words in the book. By comparison, most other books (many of which I also enjoy) seem downright sloppy.

And I challenge anyone to read this book and not be thoroughly in love with character of Taggle the cat. Bow has captured the most perfect "cat-ness" of Taggle:

Taggle was absorbed in the meat pie. "It's covered in bread," he huffed. "What fool has covered meat with bread?" He batted at the crust, then sprang back as it broke, and began licking gravy off his paw. "Ooooo," he purred. "Ooooo, good."
"Taggle," gulped Kate, again.
The cat looked up from his licking. "Oh. Well. I could share." He arched his whiskers forward and, like a lord, demonstrated his beneficence by giving away what he didn't want. "There is bread you might like."

The only other fictional animal I can think of that is this perfect, that absolutely captures the appeal of the particular species, is Manchee the dog in Patrick Ness' The Knife of Never Letting Go (which I mentioned here) whose love for the boy Todd made me cry.

For the writers out there, it was really nice for the author to include the information in the acknowledgments* that it took her six years to write this book. That seems like a perfectly reasonable amount of time in which to create something so perfect and precise. I checked out the author's web site and it looks like her next book will be out in 2012 so (yeah!) we don't have to wait another six years to read it.

And now a word about the cover art: Very pretty but it just doesn't fit. Take a look at the picture at the start of this post. It looks like the girl on the cover is having a lovely time, balancing on the ridgepole of a roof, looking out over a magical town, a gentle breeze making her hair and scarf float out behind her and her cat is prancing in front of her! This lighthearted depiction is the absolute opposite of the one incident in the book when the main character (and the cat) are on a roof. They are in a city that is about to be destroyed and the inhabitants of the city are known to pick scapegoats (like Kate), accuse them of witchcraft and burn them at the stake (so not a friendly, happy place). And by this point in the story Kate has had her hair cut off and been badly burned. She is hunched and tense and clinging to the slates. For example: "The downpour slowed to a cold soaking rain. The steep roofs were slippery, but they didn't dare go into the streets. Men in the dark garb of the city watch roamed in packs and harried the refugees from doorways and alleys. So Drina and Kate stuck to the roofs, inching, sliding, scraping, keeping out of sight. It was slow and exhausting." This cover just doesn't fit this wonderful book.

*Thank you, editor, for putting the acknowledgments at the end! One of my big pet peeves is when they are at the beginning.
Posted by Kate at 8:02 PM

If mary Beth had seen you tearing up on the stairmaster, she would have asked if you'd eaten and offered you an energy bar! :^)