Does a good dinner taste even better when it comes after a dud? Tonight's dinner was very satisfying and didn't require much work either. I made a batch of that terrific barbecue sauce before the kids got up and dumped it in a crock pot with a pork loin and left it for 10 hours. It made a pretty good approximation of southern pulled pork with almost no effort. The only change to the recipe I made was substituting ground chipotle chiles for the cayenne to give it the smoky flavor that pulled pork usually acquires via access to real smoke. I also made buttermilk biscuits, a basic coleslaw and a little steamed broccoli (for redemption). Brian was out-of-his-head happy because biscuits are the only thing he likes more than barbecued pork (can I still call it "barbecued pork" if it's not technically barbecued? Well, call me a Yankee but I'm gonna). 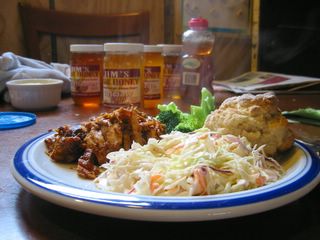 One of these things is not like the other...
that would be the bashful broccoli hiding in embarrassment
for sharing a plate with far less virtuous companions.


The biscuits made for another good honey sampling opportunity and Brian challenged my declaration that the wildflower honey was blah--he thought it was stronger than the catclaw. I still stand by my previous declaration (you think that wildflower is stronger? dems fightin' words, mister). We both thought the orange blossom was the most distinctive of the batch. In order to give all the varieties a fair sample we did consume a few too many biscuits...

The other reason I'm feeling fine is that this dinner helped redeem a piece of kitchen equipment that I've always hated--the crockpot. Brian owned this when I married him (don't judge him too harshly--he also had a whole set of All Clad cookware and Henckels knives! Yes, I did notice both the first time I stepped foot in his kitchen) and I've tried to give it away to Kiwanis twice. Both times Brian rescued it and hid it in the attic again. Before today, the only successful experience I've had with the thing was when it kept a whole lot of black bean soup warm when we had a party. I'd never actually "cooked" anything in it. Snobbishly, I put it down to incompatibility--my kind of food didn't use crockpots--I was all about fresh, bright flavors, not stewed to death stuff. Turns out I was wrong!

Making peace with an appliance is a very good thing, especially in this household where we name our favorites: my red Kitchenaid mixer is "Enzo" after Enzo Ferrari, the dishwasher is "George Washington", the fridge has lately been dubbed "Mean Mr Frosty" and the stove is simply "my darling." I don't think I can possibly come up with a better name for the crock pot than simply "crock pot"; one could employ the more sophisticated "slow cooker" but when I look at this thing it screams 1970 and "crockpot."

Great minds think alike - I've been crock potting (new verb) pork loins for years, for the exact same purpose. I buy those enormous loins when they are on sale, and have the butcher cut it into three pieces for the chest freezer.

Thanks for the reminder - I just might make Dave fake BBQ pork for a simple birthday dinner tomorrow.

I also use the crock pot for dry beans, pork for tamales, and chili. Dave likes to completely destroy a whole chicken in the crock pot but I like my poultry a bit more recognizable than that.

Glad to see the outcome after being present for part of the creation! Looks fabulous; I'm gung-ho to give it a try in our own, never-maligned slow-cooker. Care to share your slaw recipe? Or have you already, and I missed it?

At the other end of the 1970s cookware spectrum, last year we acquired a pressure cooker from my father, and I absolutely love it. The noise that the regular makes, gently rocking on top of the lid, brings memories of childhood flooding back. Lou makes rockin' beef stew in it, and I'm eating more beans than ever because, hey, they're ready in about 20 minutes.

Hey MJ--
no real recipe for this slaw, just some mayo, lemon juice, buttermilk and pepper sloshed on shredded cabbage and red onion and grated carrot. I will post the two terrific slaw recipes I have soon...

When Ami came home today she was greeted by the aroma of your Faux-B-Q that I served up along with a quick slaw and biscuits--She was pretty happy
I modified the sauce slightly using three dried chipotle chilies that I removed midday before the mixture became too combustible. My easy/lazy slaw is flavored with mayo, horseradish and pepper but I'm going to try your version next, the lemon and buttermilk sound really good. Thanks for the post.

You'll enjoy hearing how we went about getting the ingredients for your sauce. We stopped by MJ's, and she was eating a litte plate of your inspired bbq pork dish. We promptly went to Coleman's to get ingredients, calling MJ when we were there and asking her to tell us, from your post, what to buy. Pretty cool, huh?