Today in the New York Times "Dining In" section, there is an article about the a brand new research collection that is opening at U-M's Clements Library: the Janice Bluestein Longone Culinary Archive. It sounds like a big deal with "over 20,000 items, from books to magazines to menus to advertisements, from the first American cookbook, American Cookery, by Amelia Simmons, published in Hartford, Conn., in 1796, to a century of advertisements for Pillsbury flour, to a copy of every issue of Good Housekeeping."

I knew there were a lot of people in this town who like food and it pleases me to no end that my obsession is being validated in the academic community. I am particularly excited that they have a category in the collection (mentioned on their web site) devoted to culinary ephemera. Brian and I loves this kind of stuff; we like to go to antiques markets and sift through dozens of phamphlets and posters with weird food advertisements. Here is one of our finds from the American Meat Institute: 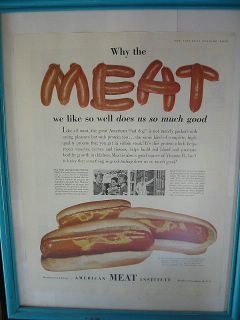 My absolute favorite piece of food ephemera in our modest collection is a pamphlet from the Banana Farmers Association titled "The New Banana!" It has a recipe on the back for possibly the most disgusting banana dish ever: Bananas and Bacon (the subtitle is "Start a conversation!" It would be quite a conversation in my house if I tried to serve such a dish.) Unfortunately I can't locate it right now, but I'm going to set Brian to the task.

On a more serious note, the library will also be hosting biennial symposia on American Culinary History which should mean that some interesting people come to town.
Posted by Kate at 3:36 PM

I really miss Ann Arbor sometimes. I loved the Clements, even though I did most of my work up in Special Collections.

Culinary ephemera: have you seen these Weight Watchers recipe cards?

Those are hysterical! They all sound absolutely disgusting--Snappy Mackerel Casserole, Fluffy Mackerel Pudding (what is it with the Mackerel?), Jellied Tomato Refresher. And the props used to "set off" the dishes are so immensely strange! How did you find this site?

Oh man, Kate, you have me cracking up over here. And I'm also wondering when you're going to start a cream puff catering and delivery service. Um YUM do those look delish.